Announcing…The 2011 Internet Marketer of the Year and Runner-Up

While the product continues to rack up record shattering ClickBank sales and gravity ranking, Mass Money Makers’ launch has officially drawn to a close. The super affiliate technology ended its official release with a bang, soaring to never-before-seen numbers and unveiling 2011’s Internet Marketer of the Year. 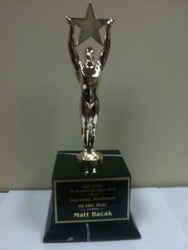 In the end, not only did they have a gravity of 1651 but Shawn Casey fought back hard enough to steal away the title from the previous three days’ top-selling duo, Paul Liburd and Antonio Giuditta, by a mere 27 sales.

Mass Money Makers’ seven-day ClickBank launch has officially come to a close. Not only did the super affiliate technology developed by Matt Bacak and Alen Sultanic shatter records, but it also pitted some of the world’s top promoters against one another for the title of 2011 Internet Marketer of the Year. As the dust still settles on Mass Money Makers’ formerly unheard-of achievements, Shawn Casey managed to eke out the win for most sales.

With 24 hours still left to its launch, on Day 6 Sultanic and Bacak received official word that Mass Money Makers had broken the ClickBank gravity record by hitting 1468.50 on the digital marketplace. That figure shattered the former record of 1351. With a full day still left in the launch, Bacak and Sultanic had proven their skeptics wrong, achieving the so-called impossible ahead of schedule.

Meanwhile, with Day 7 looming on the horizon, the hard-fought battle for Internet Marketer of the Year began capturing the Internet marketing community’s attention. Whoever secured the most sales throughout Mass Money Makers’ launch period would walk away with the crown, but that contest would come down to the final minutes before being settled.

In the end, not only did they have a gravity of 1651 but Shawn Casey fought back hard enough to steal away the title from the previous three days’ top-selling duo, Paul Liburd and Antonio Giuditta, by a mere 27 sales. For their superstar promotional efforts, Liburd and Giuditta earned $5,000 in bonus cash and Internet Marketer of the Year Runner-Up status. Casey’s first-place finish snagged him $10,000 in cash and the 2011 Internet Marketer of the Year nod.

Now that Bacak and Sultanic have had a few moments to reflect on their endeavor, they’re savoring their accomplishments. “To paraphrase a popular saying, ‘We went looking for something powerful
and found ourselves.’ All the history-making and record-setting are nice, but we discovered something more powerful from all of this. Seeing our promoters, affiliates and JV partners battle it out for us, we witnessed just how truly powerful they are. Without them, none of this would have been possible. So in a sense, we found them – and just how loyal they are. No amount of ClickBank glory can ever top that.”

Regardless of his or her ultimate placing on the Mass Money Makers’ sales chart, Matt Bacak and Alen Sultanic want to thank every promoter who came out and helped them make history. And as an expression of that gratitude, Bacak vows that this same team of supporters – himself included – will come out to support them when they need it.

Internet marketing affiliates and JV partners who would like to help Mass Money Makers continue to rack up ClickBank sales and conversions can learn more by contacting Tamara Smith at (770) 623-3008. To see how the final numbers ultimately pan out, visit https://www.clickbank.com/mkplSearchResult.htm?dores=true&includeKeywords=mass+money+makers