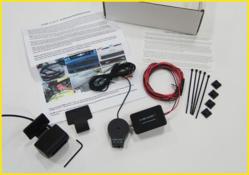 Our new Corvette Curb Alert package makes installing the Curb Alert a very simple task that can be accomplished in less than an hour.

Southern Car Parts (SCP), a leading Corvette Parts provider, began selling the very popular Curb Alert parking sensor in December of 2010, and in the year since has moved hundreds of these units with incredibly positive reviews and results; however, during that time some complaints did arise concerning the difficulty of installation for the Curb Alert—specifically as it related to the flagship vehicle the Corvette. SCP has produced a solution to this issue now, though, and the results are exciting.

The Curb Alert parking sensor is a brilliant device which uses a specially developed proprietary infrared LED technology to sense approaching road and curb hazards which could cause damage to the front end of your vehicle. The device itself is so small and versatile that it fits the very definition of universal and will work with almost any vehicle imaginable. The sensor acts to alert you within a programmable distance of 8 to 28 inches of potential damage and can ultimately protect your vehicle from thousands of dollars worth of curb damage. At less than $200 for the entire kit, the protection the Curb Alert offers is well worth the money. The installation is not decidedly difficult—I’ve seen it done in less than an hour before—but can be tricky, especially on the Corvette, and that is where this new Southern Car Parts developed Corvette installation package comes in.

Entirely unique to Southern Car Parts, the Corvette Curb Alert installation package takes advantage of the design and construction of the Corvette to allow for a near invisible installation of the Curb Alert in a short time frame. The installation itself also utilized pre-existing fuse circuits and body panel lines to remove the installation’s most difficult steps and to make calibration incredibly easy. This is important not just for the difficulty of installation that some people originally reported but also because of the necessity for such a product on a vehicle that is as prestigious and pricey as the Chevrolet Corvette. Chevy’s flagship Corvette can cost upwards of $100,000 and the front end damage that can be caused to it as result of its low, aggressive, racecar stance can result in multiple thousands of dollars worth of body and paint damage.

This new package from Southern Car Parts helps directly protect their primary consumer base, the Corvette community, and their valuable vehicles. This in-house development on their part also matches up perfectly with their history of excellent customer service for Corvette and other automotive owners looking for performance aftermarket automotive parts. For more than six years SCP has been developing a strong reputation and following in the performance automotive market and has expanded from simply dealing with Corvettes to incorporate the Chevrolet Camaro, Dodge Challenger, Ford Mustang, Nissan 350Z and 370Z, and Nissan GT-R as well. In that time they’ve reached a wide and loyal consumer base who returns to them for their shopping needs as result of SCP’s dedication to top-notch and expedient customer service and highly discounted pricing structure. The introduction of this new Curb Alert Corvette package is certain to help SCP continue their growing positive reputation, as well as the reputation of the Curb Alert product itself.