Knott's Berry Farm celebrates the 60th Anniversary of their famous Ghost Town and Calico Railroad by renaming their engine the "Walter K" after Knott's founder Walter Knott. Other activities include a model train exhibit, tour of the Knott's roundhouse and a special dinner train. 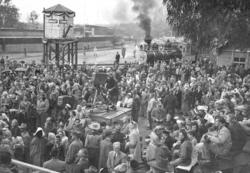 Knott’s Berry Farm will celebrate the 60th Anniversary of the Ghost Town and Calico Railroad with four days of events starting January 12-15. Scheduled activities include tours of the Knott’s Calico and Ghost Town roundhouse and private car the “Edna,” a model train display, atmosphere talent, and a historic photo display.

Kicking off the four day event will be a re-creation of the opening Golden Spike Ceremony and will include the rededication and renaming of engine 41, which will now take the name of Knott’s founder, Walter Knott. Special guests for the Golden Spike Ceremony, which will take place at 11:00 am on January 12, include Walter Knott’s daughter, Marion Knott and Orange County newscaster and former Knott’s stagecoach cowboy, Ed Arnold.

Knott’s Boardwalk Ballroom will be the site of the Del Oro Pacific Modular Railroad one of the largest and oldest “G” scale modular layouts in the United States. The layout includes elaborate displays including a forest scene, Hollywood soundstage, industrial area and a model airplane park. The Boardwalk Ballroom will also feature a historic photo display with images from the opening day of the train in 1952.

For a small fee guests can sign up for a tour of the Ghost Town and Calico Railroad Roundhouse and the private car the “Edna.” Built in 1881 for the personal use of the President of the Rio Grande Southern Railway, the Edna private car features a sitting/dining room, bedroom and galley. The Knott’s Ghost Town and Calico Railroad Roundhouse tour takes you backstage to see where Knott’s repairs and stores their locomotives and passenger cars.

Knott’s will also be offering a one-of-a-kind experience, Dinner on the Durango. For $50 guests will board the “Durango” and will be served a three course meal as they ride the rail back to the glory days of the railroad. Built in 1880, the Durango is a 14 seat parlor car featuring swivel chairs, electric lights and a fully functional buffet.

Model train exhibit, photo display and daytime train rides are included with park admission. Tours of the Roundhouse and the Edna are available for $5 per person. Reservations for Dinner on the Durango are available on Friday, January 13 and Saturday, January 14 and can be made by calling (714) 220-5298 from 9am to 5pm. To find out everything that is happening at Knott’s Berry Farm visit http://www.knotts.com