The team at MMI Outdoor is privileged to be a manufacturer of choice for the United States Military. From the first Catoma brand Individual Combat Shelters they designed and built for use in Iraq and Afghanistan, the patented Enhanced Bed Nets, Pop-Up Bed Nets and other one-person and two-person combat shelters currently used by our soldiers, mmi is honored to create the products that make their jobs a little better, but we haven’t stopped there. Now for the civilian is DEPSOC 360 camo 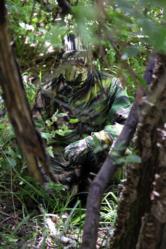 In 2010 MMI entered into a strategic partnership with HDI who invented DEPSOC 360 and at the 2012 SHOT SHOW in Las Vegas Nevada MMI will be introducing a new outdoor line of apparel built around 6 unique color patterns that can be used anywhere in the world and can be expanded to an infinite number of color ways for Universal color choice called out by the topography and environment through Kinetic Colorization™, a very special and environmentally friendly coloring technology MMI has chosen for fabrics and many of their nylons.

The line will feature outdoor pants, jackets, hoodies, wind jerseys and extremely unique engineered shirts made from breathable poly rip stop that has vents, pockets and has been engineered with the hunter or trekker in mind. The hoodies will offer two types of fleece and are colorized on both sides of the same material which is a unique feature. The poly rip stop has a UV rating of 30 plus and is light weight, rugged and comfortable.

Depsoc360™ was born out of a need. While working with U.S. Military Snipers on a concealment design project, they asked MMI if they could come up with a range-effective camouflage, complaining that the small-repeat patterns are ineffective at operating ranges.
Designed at request of sniper schools. We were asked to provide a camouflage that would work at the ranges snipers fight. Using their training points and principles of camouflage MMI and HDI developed DEPSOC

They tested it and we sent it forward to the battle fields of Iraq and Afghanistan for to be used in the real world by snipers and special operations forces. Using their feedback we improved generation by generation until we came to a product that exceeded everyone's expectations and needs. We then modified it in keeping with the ABC's of being a sniper. Always Be Cool. Special Forces want to look the part and they wanted MMI to make their special Camo very cool in addition to being effective. MMI did.

Enter Depsoc360. Its large brush shapes, shadow effects, and digitally matched natural colors create depth and break the human outline. Over the course of nearly three years, dozens of versions, consequent field trials in some of our military's hottest battlefields, and input from several elite military contacts, MMI and HDI have built what we - and they - believe to be the most effective family of camouflage ever fielded. Depsoc360™ was designed for use by our military's elite in the heat of battle and saw every soldier who used it home safely. Now it's available to the civilian market. The next evolution in camouflage technology is here.

The new unique Camo and engineered apparel should make quite an impact in the civilian market and is also being shown at the WINTER OUTDOOR RETAILER in Salt Lake City Utah at the Katmandu booth.

Depsoc360™ was born out of a need. While working with U.S. Military Snipers on a concealment design project, they asked MMI if they could come up with a range-effective camouflage which is now available to true outdoorsman worldwide through MMI OUTDOOR.