Who drops a new music video every day for 31 days straight? TestMe, Baltimore-based rapper from Dallas, releases 31 music videos in 31 days, leading up to his highly anticipated mixtape, "Everything Green", hosted by the pivotal mixtape legend, DJ Scream. 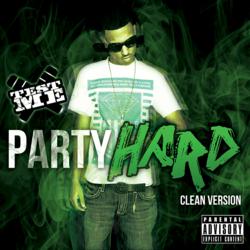 "It’s clear for all to see TestMe is making a strong run at things, and only time will tell where he goes from here."
- James Moore - Independent Music Promotions

After announcing an upcoming project, hosted by DJ Scream, TestMe (pronounced Test-Me) releases his newest single, “Party Hard”. In anticipation of his national release on February 1, 2012, TestMe is dropping a new music video daily throughout the month of January.

TestMe, well known in the mid-Atlantic region, was featured with Young Jeezy, Lil Wayne, and Jim Jones on the Scream Tour and has had four previous radio singles. He currently has two hot new songs with platinum recording artist SisQo (of Dru Hill) and Billboard Chart topping artist Future (Billboard hit “Tony Montana”). TestMe produced and engineered both of the songs with these artists.

This first single, entitled “Party Hard”, is a classic party anthem. The track and vocals guarantee that “Party Hard” will dominate hip-hop and pop airwaves through 2012. The futuristic epic feel, mixed with a crisp lyrical flow, blend seamlessly to create a track, which is sure to keep the streets live and keep the clubs jumping.

The video for “Party Hard” and the highly anticipated mixtape, “Everything Green”, hosted by DJ Scream, will be released on February 1, 2011.

Born in Dallas, but raised between Texas and Maryland, TestMe's sound is indefinable by a region. He has a slight southern accent with an east coast flavor. His light raspy voice floats over tracks, virtually hypnotizing listeners on each song that he produces, arranges, mixes and engineers.

In today’s music industry, it is rare to find a new artist that emerges and manages to reach audiences across all age brackets and cultures. It is even more rare to find a rap artist who creates urban hymns that are true to the gritty streets that have spawned rap music, yet contagious enough to dominate popular airwaves. When talent, southern charm, runway model looks are paired together, you have one of the most underrated artists of this era, TestMe.