Teens want to drink, and they find new tricks to hide liquor from parents. While whimsical, the new trend of spiked gummy candy is actually more dangerous than drinking straight liquor in many aspects. Sunset Bay Academy outlines the dangers of this new trend and how parents can find out if their teens are involved. 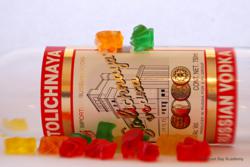 More than three quarters of teens say they drink because it feels good, with two thirds saying they do so because they forget their problems. Two thirds of teens who drink cite peer pressure as a reason for drinking.

Teen alcohol abuse is not a new concern. Parents try to set a good example and keep the alcohol out of reach of children. This once meant keeping the liquor cabinet locked or making sure a parent was at any parties. However, we must not underestimate the resourcefulness of teens who want to drink.

Teens in the Midwest are taking gummy candy and soaking it in alcohol to consume liquor more discreetly. While the trend of spiked gummy candy is mostly confined to the Midwest, the speed with which information travels is sure to make this a popular alternative to simply sneaking bottles around. The spiked gummy bears are significantly larger than their non-alcoholic counterparts and are usually made with vodka, meaning that it may be difficult to smell the alcohol in the candy but easy to spot the oversized pieces. Recipes vary, but all of them require the gummy bears be soaked in a refrigerator for at least one day, though some recipes ask for longer, up to 3 weeks.

Savvy teens already have a trunk-full of tricks to get alcohol past watching parents. Still, parents have a few advantages with tracking this method.

Since the gummy bears must be chilled, teens need a refrigerator. Likewise, the gummies must be consumed in large quantities, so teens that don’t normally eat candy and suddenly consume a lot of gummy bears or similar treats should be a warning to observant parents. A lot of mixed or colorful drinks like sports drinks are also popular hiding places, and vodka is a popular choice because it often lacks a strong smell.

The liquor gummy candy carries additional risk. Studies show that gummy bears are just as dangerous as other foods high in sugar. Because they contain no fat, though, some people think they are safer. Additionally, unlike chugging beer or doing shots, a teen getting drunk using gummy candy is at an increased risk of chocking. While alcohol poisoning or even getting lightly drunk can make someone vomit or choke, using gummy candy as a vehicle adds food to the equation. When someone gets inebriated enough, it’s not just liquid coming back up, but soft, rubbery bits that can make a bad situation worse. The danger of choking with gummy candy is most evident in toddlers, but a drunk teen loses a lot of control of his or her body.

The statistics on teen alcohol abuse tell us that the ingenuity may stem from the need to drink. In 8th grade, almost a quarter of teens reported having consumed alcohol, and this number increases to more than half by 12th grade. More than three quarters of teens say they drink because it feels good, with two thirds saying they do so because they forget their problems. Two thirds of teens who drink cite peer pressure as a reason for drinking.

Teen alcohol statistics and the ingenuity with which they hide their drinking should enlighten us to the mental state of our youth. Figuring out you can hide alcohol in candy, for example, is a fairly inventive way to hide deviant behavior. It’s not the kind of thing someone discovers accidentally.

Being ingenious or desperate enough to hide liquor in gummy candy could be a sign of alcohol abuse and addiction. In Therapeutic Boarding Schools like Sunset Bay Academy you will find programs designed to help both teens and parents fight alcohol abuse.