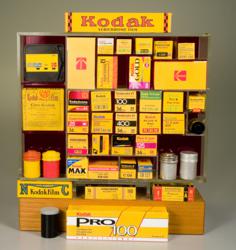 The vibrancy of the bright yellow box of film has faded. The iconic Eastman Kodak Co., once a giant in the film industry, has filed for protection from its creditors under Chapter 11 of the U.S. Bankruptcy Code. Founded in 1881 under the helm of inventor George Eastman, the company was a trailblazer in photographic equipment and cameras until the shift to digital technology.

It’s no longer a “Kodak moment,” say experts from Rochester Institute of Technology—who discuss the decline, struggles and opportunities for the global industrial and commercial technology giant based in Rochester, N.Y.

The following are insights from experts at RIT’s E. Philip Saunders College of Business and RIT’s College of Imaging Arts and Sciences:

The historical and photographic perspective

Malcolm Spaull, chair of RIT’s School of Film and Animation in the College of Imaging Arts and Sciences:

Rochester Institute of Technology is internationally recognized for academic leadership in computing, engineering, imaging science, sustainability, and fine and applied arts, in addition to unparalleled support services for deaf and hard-of-hearing students. RIT enrolls 17,500 full- and part-time students in more than 200 career-oriented and professional programs, and its cooperative education program is one of the oldest and largest in the nation.

For more than two decades, U.S. News & World Report has ranked RIT among the nation’s leading comprehensive universities. RIT is featured in The Princeton Review’s 2012 edition of The Best 376 Colleges as well as its Guide to 311 Green Colleges. The Fiske Guide to Colleges 2012 names RIT as a “Best Buy,” and The Chronicle of Higher Education recognizes RIT among the “Great Colleges to Work For 2011.”