New movie based on an inspiring true story premieres Sunday, January 29 on ABC 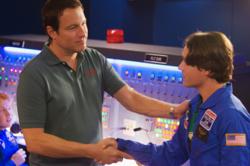 A Smile as Big as the Moon

“Mike Kersjes changed a lot of lives,” says actor John Corbett. “As a teacher, he made a great impact on the special-ed kids he worked with. But he also broke down barriers for countless other kids."

John Corbett (Sex and the City, Hallmark Hall of Fame’s November Christmas) plays Michigan high school football coach and special-education teacher Mike Kersjes who helps his special-ed students achieve their impossible dream: to attend Space Camp at the U.S. Space & Rocket Center in Huntsville, Ala. Their inspiring journey – based on a true story – is recounted in a new Hallmark Hall of Fame film, "A Smile as Big as the Moon", premiering on ABC Sunday, January 29, 2012, 9-11pm ET/PT.

Kersjes is aided in his mission by another teacher, Robynn McKinney, played by Once Upon a Time’s Jessy Schram.

Space Camp is a competitive education program. Pre-Mike Kersjes, it had been the exclusive preserve of elite students from elite schools. Mike decides participating in the program would do wonders for the self-esteem of his students, including Ben (Peter ten Brink), a boy with Down syndrome, who dreams of becoming an astronaut.

Mike Kersjes faces incredible obstacles in trying to make his impossible dream become an inspiring reality. School administrators oppose the plan – too expensive, they say. Space Camp officials (led by Dr. Deborah Barnhart, played by Lost’s Cynthia Watros) are initially reluctant to change the status quo. Even after Mike, Robynn and their students are given the green light, the rigorous teaching, learning and training takes the better part of a year.

Interviewed on location at the U.S. Space & Rocket Center in Huntsville, Ala., John Corbett says he hopes the "A Smile as Big as the Moon" audience will be both entertained and inspired by the story.

“Mike Kersjes changed a lot of lives,” Corbett says. “As a teacher, he made a great impact on the special-ed kids he worked with. But he also broke down barriers for countless other kids. Once his class made that first groundbreaking visit to Space Camp, the doors were thrown wide open.

“Thanks to a foundation he set up, more than 3,000 special-ed kids have been able to come here and experience the wonder and magic of space exploration.”