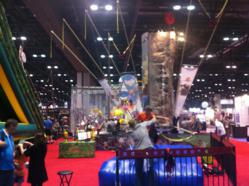 I was in complete shock. I didn’t expect an award this year, especially after winning 5 awards.

Extreme Engineering, the leader in climbing walls, ziplines, Extreme Airs and jumper products was awarded its sixth award at the 2011 IAAPA trade show.

“I was in complete shock. I didn’t expect an award this year, especially after winning 5 awards,” stated Philip Wilson, Director of Marketing with Extreme Engineering.

The 2011 IAAPA award made this Extreme Engineering’s sixth consecutive win, the first in history. Ryan Lucia, sales manager, stated, “This is the best show on record! The new Zippin Zone zipline, Balloon Battles and Extreme Air jumpers were a huge hit, earning us the most deposits at an IAAPA trade show.”

With recognition from IAAPA, local news stations and the industry press, the Zippin Zone zipline and Balloon Battles received plenty of praise in the 4 days of the show. Philip Wilson explained that from the results of this year’s IAAPA it has become a strong indication that the amusement industry is heading in a positive direction. With 4 best new product and 6 total industry awards, Extreme Engineering has proven to be a serious contender at IAAPA and acknowledged by a growing, profitable industry.