Polycrystalline ceramics with cubic Spinel structure transmit well in the visible and mid IR wavelengths of the electromagnetic spectrum. ALON® and Magnesia Spinel are especially attractive and are leading lightweight transparent Armor candidates for future combat systems. These have enormous performance advantage over glass and justify their rapid development. 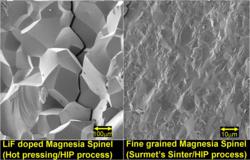 The fracture surface of LiF/HP/HIPped Spinel in the micrograph on the left shows large grains and a failure mode that is almost entirely intergranular. On the other hand, even at a magnification ten times higher, the fracture surface of a Surmet sinter/HIPped Spinel, exhibits a failure mode that is transgranular and a very fine grain structure corresponding to it's 5-7 times higher strength.

Components of thin cross section such as missile domes are especially vulnerable to damage when the grains are large and are held together weakly. This issue needs to be addressed head on before Spinel parts produced using LiF doping are deployed broadly.

Using the conventional Sinter/HIP process, Surmet makes Spinel that is fine-grained and many times stronger. The fracture surface of Sinter/HIPped Spinel, exhibits no evidence of detrimental features, even when viewed at magnifications ten times higher. The fracture occurs in a trans-granular mode, typical of high strength materials.

In lithium fluoride doped, hot pressed and HIPped Spinel, the grains simply seem to separate when subjected to stress. To avoid this, it is imperative that 100% of the lithium fluoride be removed after it has done its fluxing function. That is a difficult challenge. Factors that make LiF effective also make it difficult if not impossible to remove it completely.

Missile domes that have thin cross section geometry are especially vulnerable to breakage when the grains are large and are held together weakly. This issue needs to be addressed head on before spinel components produced using LiF doping are broadly deployed. It is very important to find out what effects this grain boundary weakness has on ballistic performance.

Founded in 1982, Surmet Corporation is an Advanced Materials Development & Manufacturing Company. Head Quartered in Massachusetts, Surmet has R&D and manufacturing facilities in, Buffalo, NY and Murrieta, CA. Surmet is grateful to the US Department of Defense for multiple funding supports.

To find out what Surmet can do for you, visit our website http://www.surmet.com