The video, available on VibrAlign’s Youtube channel, explains the critical importance of eliminating sources of unintended movement before conducting a shaft alignment on rotating machinery. 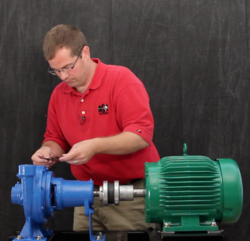 Eliminating unintended movement is critical to making shaft alignment as efficient and as accurate as possible.

VibrAlign, Inc. has released a new video entitled “Pre-Alignment Steps For Shaft Alignment”. The video describes the four essential steps that should be taken before undertaking a shaft alignment of rotating equipment. The four steps are:

The video features Patrick Lawrence, VibrAlign Trainer. According to Lawrence, “Eliminating unintended movement is critical to making shaft alignment as efficient and as accurate as possible. By completing the pre-alignment steps outlined in the video, you shouldn’t have any unintended movement during the more precise steps of the actual alignment.”

Soft foot, the condition when weight is not resting evenly on all four feet, causes the motor to rock like a table with one short leg. Soft foot is a major contributor to unpredictable alignment results. Its elimination is critical to good alignment.

VibrAlign has been providing shaft alignment expertise for 30 years to help America’s industry keep its rotating equipment operating. This depth of experience and the company’s commitment to give back are the bases for VibrAlign’s Realign America campaign. This expertise has also led to the development of a process for shaft alignment, which VibrAlign calls “Verti-Zontal”. This new way to perform alignments can result in precision alignments being completed in record time.

VibrAlign started in 1983 as a vibration and alignment service organization and later became a distributor of equipment which, appropriately, equipped our team to better serve. VibrAlign is America’s exclusive distributor of Fixturlaser® – the manufacturer of the only touch screen tool available with 3D animation and sensor safeguard against sunlight. For thirty years, VibrAlign has been growing across the country. Today we proudly operate out of local offices in every major region.