420 Magazine Sets The Record Straight - The True Origin of 420

The Bebe Is The Thomas Edison of 420 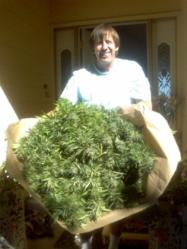 Brad Bann aka The Bebe

I received an email from a guy named Brad Bann aka "The Bebe", claiming to be the Father of 420, saying that it all started in 1970 with a group of guys called "The Bebes".

Ever since reading an article about a group of guys named the Waldos claiming to be the originators of 420, we had doubts from the start as something didn't make sense. Why did they choose 4:20 as the time to meet at the statue and who was the one that first coined the term? This never made any sense to us and we knew something wasn't right. Suspecting there was a true originator, we began sending out energy for them to contact us for this article. Today was that day.

We received an email from a guy named Brad Bann aka "The Bebe", claiming to be the Father of 420, saying that it all started in 1970 with a group of guys called "The Bebes". They lived on a golf course, in a neighborhood called "Peacock Gap" in San Rafael, California. The Bebe and one of the other Bebes named, "Bone Boy", sent their claim to High Times in 2003, after someone sent them the article they did on 420 and the Waldos. They waited for months, yet never received a reply.

The Bebes are a group of athletes from San Rafael, CA, who went to San Rafael High School in 1970. They were well known for their prank phone calls and recordings. Brad Bann aka The Bebe was the leader of the group and was joined by all of his friends, whom he ordained and named as well. There was Dave Dixon aka Wild Du, his brother Dan Dixon aka Puff, Dave Anderson aka Hello Andy, Tom Thorgersen aka Thorgy, Bone Boy, Blue, The Mead, Turkey & The Worm.

The Waldos are a group of non athletic guys from San Rafael, CA, who went to San Rafael High School in 1970. They were known for being uncoordinated and goofy, which is why The Bebe nicknamed them all Waldos. There was Steve Capper and David Reddix who have gone public with their names, Patrick, Larry, Jeff, John and Mark, who have not gone public as of yet. While these guys may have been responsible for promoting 420 across country, there is no question that they did not coin the term and have been dishonest with the world from day one. True credit goes to The Bebe and his brotherhood of Bebes.

420 Magazine exists to support the repeal of all Cannabis prohibition laws and penalties throughout the world. Not another person should suffer incarceration or stigma because of these unjust laws. We believe Cannabis prohibition will end as more people become aware of the true benefits of the plant.

420 Magazine is the vehicle that provides you with the scientific and anecdotal advice of Cannabis experts in the areas of cultivation, medical, social and legal matters. Our community provides support to those bringing Cannabis awareness to the world.

We believe each human has the right to consume a plant in his or her own body, government should repeal all laws violating this right and those incarcerated for Cannabis offenses should be set free.

420 Magazine believes farmers shall have the right to grow and profit from Industrial Hemp - one of the strongest, environmentally friendly substances on the planet. Industrial Hemp is a natural fiber found in everything from rope to the finest clothing designs. It shows benefit as both a food form and as a health and beauty aid. Hemp is the environmental answer to the elimination of our dependence on earth-destroying fossil fuels. The Hemp bounty will end oil wars, deforestation, pollution, acid rain and global warming.

The Mission of 420 Magazine is to repeal Cannabis prohibition by promoting international Cannabis awareness to the masses.