Judyth Vary Baker’s explosive story brings new insight to the role of Lee Harvey Oswald in the JFK assassination. This is first time reclusive researcher and author has been in US in more than five years; author lives abroad for her safety. 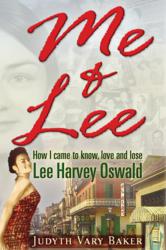 She is a living witness to events that changed America, and knew Lee Harvey Oswald as well as other key players in the fateful November, 1963

ATTENTION PRODUCERS/REPORTERS:
Ms. Baker will be available for limited press interviews between November 7 and December 15. Contact Kris Millegan at 1.800.556.2012 (publisher(at)trineday(dot)net) or Cheron Brylski at 504.897.6110 (cbrylski(at)aol(dot)com) for to arrange an interview.

In the Spring of 1963, Baker was contacted by Dr. Alton Ochsner, former President of the American Cancer Society and founder of the Ochsner Medical Clinic, to work on a summer project in New Orleans involving the transference of cancer via vaccine and its possible cure. During the course of this internship, Ms. Baker meets Lee Harvey Oswald, who becomes her constant companion, and eventually, her lover.

Oswald is also associated with the Oschner project. The cancer research Ms. Baker is working on, she soon learns, is tied to efforts to kill Cuba’s President Fidel Castro, possibly by a tainted cancer-inducing vaccine. Dr. Oschner is a supporter of anti-Communist activities.

Though Ms. Baker eventually returns to Florida, she remained in phone contact with Lee Oswald until Nov. 20, 1963, just two days before the JFK assassination. Her book, Me and Lee, recounts the events of 1963 and the words of her final conversation with Oswald.

Former Governor Jesse Ventura calls Baker’s book “stunning” and ranked it among his six favorite conspiracy reads. NY Times Best-Selling author Jim Marrs, author of Crossfire: The Plot that Killed Kennedy, recommends “the impassioned, unflinching voice of Judyth Vary Baker” to hear what our government will not tell us.

During her US tour, Ms. Baker will be speaking at the Roxy Theater in San Francisco on November 22, the 49th anniversary of the JFK assassination, which falls on Thanksgiving this year.
Donations to support Judyth Vary Baker’s speaking tour should go to Kickstarter.com