The Crane Residential Resort, the Oldest Hotel in Barbados, is About to Become a Public Company

The Crane Residential Resort, the oldest hotel in Barbados, is about to become a public company. Totally Barbados has been informed that the luxurious Crane Resort and Residences is preparing for its initial public offering (IPO) with the hope of raising Bds $120 million. 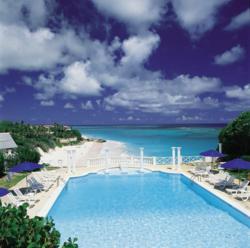 The Pools at the Crane Resort and Residences

The Crane Residential Resort, the oldest hotel in Barbados, is about to become a public company.

The Crane Residential Resort, the oldest hotel in Barbados, is about to become a public company.

Totally Barbados has been informed that the luxurious Crane Resort and Residences is preparing for its initial public offering (IPO) with the hope of raising Bds $120 million.

The IPO is intended to increase the capital base of the resort. The Crane's Managing Director Paul Doyle says all preparations should be completed sometime in November and he expects the resort to be listed on the Trinidad and Barbados stock exchanges by yearend.

He says initial feedback from those markets has been positive and that makes him optimistic about having a successful IPO. Mr. Doyle says the capital raised would allow him to invest in a number of other Barbados tourism related projects.

Among them is the eco-friendly Culpepper Development not far away from the Crane. It will feature beach houses practically built into the hillside in a very unobtrusive manner.

Another investment opportunity involves the Crane's bid for Almond Beach Village, which is still under consideration by the Trinidad Conglomerate Neal and Massy which owns the hotel.

Almond was closed at the end of May after operating at a loss for years. The Crane and the owners of Sandals Resort in Jamaica are among those vying for the property.

Additionally, Mr. Doyle has indicated that they still have an interest in the historic Sam Lords property, which is the subject of ongoing litigation. He believes he can restore the now derelict building and surround property to their former glory.

The hotelier is convinced that if he does acquire those properties, he can replicate the Crane's success at each of them.

Regarding the resort's current performance, he points out that it is enjoying double-digit growth, with bookings so far for 2012 up by 10 percent over the previous year.

He credits this to the business model, which allows for shared ownership by guests, thereby providing a constant flow of revenue.

This has also helped with the resort's expansion which has been ongoing for more than a decade. It currently has 252 rooms, while 30 more are under construction.

The move to go public comes as the Crane celebrates its 125 anniversary.

The resort first opened its doors in 1827, making it the oldest hotel not just in Barbados but in the Caribbean.

From the beginning it was famous for its breathtaking cliff-top view of the Atlantic Ocean. Over time it also became known for its excellent amenities and world-class hospitality.

All this was taken into account when the Automobile Association of America (AAA) awarded the Crane its first Four Diamond rating in 2008.

The AAA evaluates more than 60,000 lodgings annually in North American and the Caribbean and the coveted rating is awarded to just three percent of those reviewed.

About Totally Barbados and Brecal Inc.

Brecal Inc., operating under the name 'Totally Barbados' was founded by Brett Callaghan and is based in Barbados in the Caribbean. The company was incorporated February 24th, 2005.

Totally Barbados was voted the "World's Leading Travel Destination Website" for 2008, 2009 and 2010 by the World Travel Awards.

By guiding visitors to Barbados hotels, car rentals, restaurants, attractions and more on Totally Barbados dot com, visitors can easily plan their entire holiday and vacation, before arriving in Barbados.
Promoting all there is to know about the Caribbean Island of Barbados - that's Totally Barbados.