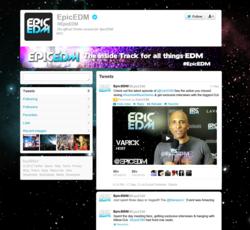 Our approach with Twitter is to own the social engagement around this movement.

EpicEDM will be the inside source for all things EDM, from the artists and tours to the world’s most exclusive nightclubs and biggest music festivals. The new series will live at @EpicEDM along with a range of new content providing 24/7 EDM insider access.

To host this new worldwide hub for EDM and premiere this original content series, Believe Entertainment Group will utilize Twitter’s entire Promoted Suite of products, including Twitter’s latest innovations, such as interest and geo targeting, allowing EpicEDM to showcase the best content and enable real-time conversations among EDM fans.

“The social media space is at the heart of this massive, global movement, so it made sense to us to curate an EDM series on the same social media platform that continues to fuel its growth,” said Dan Goodman, co-founder, Believe Entertainment Group. “Our approach with Twitter is to own the social engagement around this movement.”

“We’re building where the EDM community and DJs already intersect to amplify what’s happening,” said William H. Masterson III, co-founder, Believe Entertainment Group. “The goal is to create a unifying platform for the artists, fans and everyone involved in the EDM explosion that serves as a dedicated place to share the best things happening anywhere, at any given time in the EDM world.”

A network of official partners, unofficial friends and user Tweets curated by EpicEDM will bring always-on programming including weekly in-studio video updates and exclusive artist interviews with some of the biggest DJs and producers in the world, access to pre and post-events, contests and ticket giveaways, daily news Tweets, video blogs, photos and more.

Believe Entertainment Group is the New York-based independent digital studio behind the recent popular series In the Booth featuring legendary DJ/Producer Tiësto that premiered on YouTube with more than 70 million views in its first three months, and The LeBrons, with NBA champion LeBron James. The studio will launch a new lifestyle and entertainment news series with Jennifer Lopez, called Tiger Beat Entertainment, later this year.

Believe Entertainment Group will finance and sell EpicEDM; additional details on advertiser partnerships for EpicEDM will be announced soon.

In April 2011 the company launched The LeBrons, a new original, animated Web series with NBA champion and three-time league MVP, LeBron James and brand partners HP, Intel, Bing, Sprite and Nike, that premiered on YouTube (youtube.com/TheLeBrons) and was distributed through LeBron’s Facebook, Twitter, and a dedicated section of LeBronJames.com, with syndication through Digital Broadcasting Group (DBG). In 2010, Believe Entertainment Group formed an alliance with Paramount Digital Entertainment (PDE) working together on the hit digital series The Legion of Extraordinary Dancers (The LXD), created by Jon M. Chu (Step Up 2: The Streets and Step Up 3D) and distributed through Hulu; the company also expanded its partnership with MommyCast, the Webby Award winning multi-medium show for moms, and announced the launch of MommyCast Latina, a first-of-its-kind, original HD Web show specifically for the Latina mom.