The Theory of Something presented last month, predicts that space is filled with a Grid of fundamental charge particles, called negtrinos, and that matter is surrounded by Grid rooms. The proposed modified Michaelson-Morely type of experiments are expected to show that such “aether” exists, just as believed by Maxwell and other scientists in the late 1800s and that the speed of light only is constant in relation to the Grid. 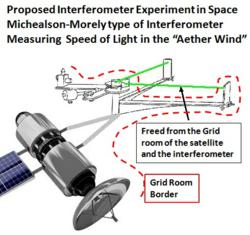 Positive results from any of these experiments will eradicate the mystery of light and the photon by showing that they propagate in a medium just like other waves. That medium is the Grid and Grid rooms predicted by the ToS.

Confirmation of the Theory of Something (the ToS) prediction that light is a wave in the Grid will not mean that Einstein’s theory of special relativity is wrong. On the contrary, the second postulate of Einstein’s special relativity theory says that the speed of light is not dependent on the speed of the light source, which is exactly what can be expected if there is a medium, an “aether”, for light to travel in. The mysterious result of the Michaelson-Morely experiment was that the speed of light was found to be constant also when the observer was moving toward or from the light source. However, before the ToS was presented last month, there was no knowledge of the Grid rooms surrounding matter.

“Positive results from any of these experiments will eradicate the mystery of light and the photon by showing that they propagate in a medium – the Grid - just like other waves” says G.D. Tosman who is behind the Theory of Something.

In the ToS, the universe is filled with the negtrino particle arranged in a cubic Grid that forms Grid rooms around all objects. It is the Grid rooms that give mass to matter and since the Grid only can contribute with 96.4 kg per cubic meter, a Grid room surrounding e.g. a 10 kg object will occupy a volume of 104 liters that are stuck around that object.

All Michaelson-Morely-like experiments have been done in the static Grid room that surrounded the measurement equipment itself and therefore just showed that the speed of light is constant in relation to the Grid. “Partial aether dragging” was early suggested as an explanation of the results, but without knowledge of the Grid rooms, the remedies that were tested only enlarged the static Grid room around the measurement equipment.

The second proposed experiment can be performed in a laboratory on Earth, where masses are rotated close to the light path of an open interferometer, so the Grid rooms of the masses are brought in and out of the light path and will modulate the measured speed of light.

The experiments can also confirm that Grid rooms contribute with 96.4 kg per cubic meter to the mass of matter objects as predicted by the ToS.

This release is one in a series to bring reality and understanding back to the mysticism of the quantum world and the workings of the universe. The ToS document and the Summary of the ToS that also lists the overwhelming support and proofs of the Theory of Something can be downloaded at http://theoryofsomething.com.

From the single fundamental physical law, the electromagnetic force between moving point charges, all other physical laws can be derived. Newton’s gravity law, his second law of motion (F=ma) as well as the force accelerating distant galaxies have been derived in the ToS. These three forces acting upon mass (which is a charge increase in the Grid), as well as the strong and weak forces of the standard model, are electromagnetic in nature and not carried by particles. No fine-tuning of physical constants, no energy emerging out of nothing, no extra dimensions, no new physical laws emerging now and then, etc. are required for universes to exist. The universe we experience was seeded at the Big Bang when the recently detected dark energy was injected into our universe.