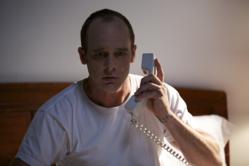 “RIDES.tv provided a landscape to tell a horrifically interactive story like we’ve never been able to do until now” said filmmaker and director, Toby Wilkins.

Emmy Award-winning Fourth Wall Studios has released the fourth installment of their Dark Wall horror anthology, “6:14,” the story of a man caught in an endless nightmare. The transmedia short is available to view for free now on Fourth Wall Studios’ platform, RIDES.tv.

Directed and co-written by acclaimed horror filmmaker Toby Wilkins (SPLINTER, THE GRUDGE 3), “6:14” is about a man (Ethan Embry, Brotherhood, Eagle Eye, Vacancy, Kidney Thieves, Disturbing Behavior) woken from his sleep by a phone call, with a stranger (Michael Ironside, Justified, X-Men: First Class, The Butcher, Masters of Horror, V, Scanners) on the other line. Puzzled by the call and the peculiar look of the room he’s in, he leaves his bed to inspect his surroundings. Unfortunately for him, his curiosity leads him to a deadly morbid encounter that he cannot escape. Just as he believes this to be the end, he wakes up again, in his bed, with the phone ringing again. Was it all a nightmare? A delusion? Or something far more terrifying?

“RIDES.tv provided a landscape to tell a horrifically interactive story like we’ve never been able to do until now” said filmmaker and director, Toby Wilkins. “The platform developed by Fourth Wall Studios allowed us to blur the lines between what is occurring in the real world against a dreamlike state and to tell a story in a completely immersive manner. I’m excited that genre fans will get to experience this kind of gruesome interactive short just in time for Halloween.”

"You know when you are asleep and the alarm going off in the real world is re-purposed by your subconscious to come across as someone screaming at you in a dream? That is the landscape of the story we wanted to tell” said Zach Schiff-Abrams, executive producer at Fourth Wall Studios and co-writer of 6:14. “We wanted to make something visceral and Toby Wilkins was a huge win for us. He constantly challenged the development and production of 6:14 to both define a great horror short and a unique use of our platform."

DARK WALL’s 6:14 leverages cutting-edge technology of the RIDES.tv multiscreen entertainment platform and offers an experience that brings this horror to life. The audience becomes a part of the story.