East Tennessee Parents Urged to Talk to Teens about Sex 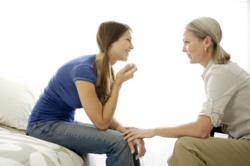 In an average class of 30 Tennessee high school seniors, 21 have had sex and nine have had more than four partners.

As many as 37 percent of these teens said they haven’t had a single conversation with their parent or guardian about sex.

Knox County Health Department and KAPPI, the Knox Adolescent Pregnancy Prevention Initiative, today announced the launch of a new website aimed to reduce teenage pregnancy in East Tennessee. The website, http://www.mybodymyfuture.com, provides tips for parents to talk to their teens about sex and relationships and provides facts about pregnancy, and STDs.

With funding received in part from a federal grant, the two organizations chose October to launch the initiative throughout East Tennessee, coinciding with National “Let’s Talk” Month, a public education campaign coordinated by Advocates for Youth.

According to a recent study by the Tennessee Comptroller of the Treasury, in an average class of 30 Tennessee high school seniors, 21 have had sex and nine have had more than four partners. In 2005, Tennessee ranked eighth worst in chlamydia rates, 13th worst in gonorrhea rates and had the 12th highest HIV rate in the nation.

“Tennessee consistently ranks among the top 10 states for highest teen pregnancy rates and sexually transmitted infections,” said Kathy Brown, director of community assessment and health promotion at the Knox County Health Department. “The issue of teenage pregnancy leads to many societal problems including reduced high school graduation rates and career opportunities, and we want to change those statistics.”

According to Brown, 87 percent of area teens say it would have been easier to wait before becoming sexually active if they were able to have open conversation with their parents or guardians.

“As many as 37 percent of these teens said they haven’t had a single conversation with their parent or guardian about sex,” she said. “It is important for parents to have open and honest conversations with their teens.”

While parents may be embarrassed when talking to their teens about sex and relationships, the two nonprofit organizations hope the campaign will help start the conversation.

“Teenage pregnancy is a serious community concern, and we want to get parents talking to their kids early and often,” she said.

About KAPPI
The Knox Adolescent Pregnancy Prevention Initiative began in 1991 as a community coalition to address the issues surrounding teen pregnancy and parenting. It is part of a state-wide effort of the Tennessee Department of Health and is housed at the Knox County Health Department. In 2008, KAPPI became exempt from Federal income tax under section 501(c)3 of the Internal Revenue Code, incorporating KAPPI as a non-profit corporation in Tennessee. As such, contributions to KAPPI are deductible under section 170 of the Code. For more information, visit http://www.mybodymyfuture.com.