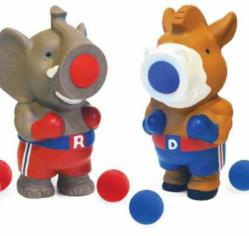 Political poppers are just one of the wackier promotional products being distributed this election season, adding up to $870 million in ad specialty spending on everything from Obama trailer hitch covers to campaign yard signs, flyers and buttons.

“This latest ASI sales survey is another indication of continued growth for a recession-proof industry that began a strong rebound more than two years ago on the heels of the worst economic downturn in recent history,” said ASI CEO Timothy M. Andrews.

The industry has posted gains for 11 straight quarters, according to ASI surveys. Nearly half of all distributors in the $18.5 billion promotional products industry sell election-related items like yard signs, flyers, pins, buttons and T-shirts used by campaigns and special interest groups to promote their candidate or cause.

Total advertising specialty expenditures for the first six months of the year grew 5.3% to $8.5 billion. By contrast, total advertising expenditures – which exclude promotional products – for the same time period grew 1.9% to $67.1 billion, according to Kantar Media, the leading provider of strategic advertising and marketing information.

“This latest ASI sales survey is another indication of continued growth for a recession-proof industry that began a strong rebound more than two years ago on the heels of the worst economic downturn in recent history,” said Timothy M. Andrews, president and chief executive officer of ASI, the largest media, marketing and education organization serving the promotional products industry. “According to our surveys, the industry as a whole defied the recession and actually grew by 6.2% in 2011 and is on track to end this year nearly as strong.”

The average cost-per-impression of an ad specialty item is half a penny, beating nearly all other forms of advertising. Ad specialties, aka promotional products, are items imprinted with logos or slogans and are often given away to market a company, organization, product, service, achievement or event. A recent ASI study found 84% of respondents remembered the advertisers on promotional products they’d received, demonstrating their high return on investment for marketers and businesses.

ASI derived its election estimate by comparing total promotional product spending to total advertising spending in the U.S. and estimates of the total amount spent on elections this year. Not all of the promotional political products are sold through the distributor channel.

ASI’s sales surveys are prepared by Larry Basinait, executive director of ASI research services. ASI commissioned its exclusive survey to estimate industry sales. Invitations went to ASI distributor members who were the primary contact with their firms, and had been in business at least one year.

About ASI
The Advertising Specialty Institute (ASI) is the largest media, marketing and education organization serving the promotional products industry, with a network of over 27,000 distributors and suppliers throughout North America.