My Fat Pet® opened a floodgate of flabby four-legged friend photos submitted from pet owners around the globe. What began as an idea to raise awareness of health issues associated with pet obesity has snowballed into an enormous photographic collection of plump dogs, fat cats, and other overweight pets. 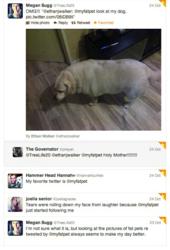 Twitter followers can't get enough of "My Fat Pet"

Purely out of affection, humans show their love by feeding their pets too much of the wrong things.

What began as a dog lover’s “silly idea” to raise pet health awareness has taken on a life of its own as thousands of photos of overweight pets pour into the “My Fat Pet” Twitter page and “My Fat Pet” Facebook page.

Entrepreneur, itinerant photographer, and animal lover Wil Fernandez decided last month to take advantage of his pet project’s growing momentum and launch a “My Fat Pet” photo contest. Within the first week alone, hundreds of pet owners were inundating the contest sites with photos of their corpulent companions, adding to the tens of thousands of Facebook fans and Twitter followers that had subscribed to the social network-based initiative from its inception.

Fernandez says the MyFatPet.com website and the associated social networking destinations have “passed the proof of concept.” Now he is working on a plan to make the most of the early momentum by keeping healthy pet care fun, interesting, and affordable through interactive tools and social media initiatives that will hold the interest of pet owners, and animal advocates.

“My goal is to help more animals live happy, healthy lives,” Fernandez says. “We’ll do this by attracting owners of overweight pets through a fun, non-confrontational medium, and then subtly expose them to the right tools and resources that can help change their pet feeding and training behaviors.”

Fernandez began taking an active interest in animal welfare while photographing stray dogs in his travels through Mexico, Central, and South America with his own traveling companion – a Jack Russell terrier named Sid– by his side. Sid stays fit on the pair’s constant travels with a healthy diet and plenty of exercise, according to Fernandez.

“It’s not that people who own obese pets don’t love them, as you can tell from so many of the endearing pet photos and comments that we receive,” Fernandez says. “Purely out of affection, humans show their love by feeding their pets too much of the wrong things.”

“But just like people, obese pets can suffer from diabetes, heart and circulatory problems, breathing problems and other health issues related to their weight.”

Pet owners are encouraged to submit creative photos of their beefy dogs and cats to become eligible to win one of three gift certificates from a nationally recognized pet supply store. Photos will be accepted through November 15, followed by 30 days of public voting. Winners will be announced in mid-December.