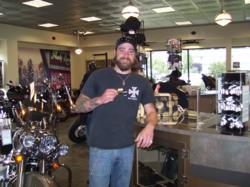 Man wins motorcycle; Odds On Promotions picks up the tab.

To promote a very large end of season sale, Harley-Davidson® of Danbury sent out thousands of over-sized postcards, each with a small key attached, announcing the chance to win a brand new Fat Boy® Lo if the key on the mail piece was the "lucky key" that would open a locked treasure chest placed on the dealership's showroom floor. To ensure the promotion didn't end up costing them more than they bargained for, the dealership insured the promotion with Odds On Promotions, the nation's largest direct mail prize insurance provider.

A couple of days after receiving the mailer, Pierce was out shopping and decided to swing by the dealership. He showed his mailer to the cashier at the dealership who directed him to a floor display featuring a locked chest where he tested his key. To everyone's surprise, it opened, winning Pierce the new set of wheels.

According to Jeff Watson, Marketing Manager with Harley-Davidson® of Danbury, who created the promotion, “We do several direct mail promotions each year; they are very effective for driving traffic. This was the first time we've had a winner and we were very glad that Odds On Promotions was there to pay for the prize. We were thrilled to hand Chris the keys to his new ride. It couldn't have happened to a nicer guy."

Mark Gilmartin, president of Odds On Promotions, the prize insurance company that insured the direct mail promotion and paid for the Fat Boy® Lo said, "We insure dozens of key mailers every month. Not only have studies shown that ‘lumpy’, that is, dimensional mailers, drive bigger response rates, but when you pair them with an incentive that speaks to your target customer, such as the chance to win a new car, or in this case a Harley®, it just makes the offer that much more enticing – and effective."

About Odds On Promotions
Founded in 1991 and headquartered in Reno, Nevada, Odds On Promotions, together with its sister company, Hole In One International, provides promotions, over-redemption and prize indemnification coverage for over 18,000 events annually. Odds On Promotions is a full service promotions company and purchasing group, licensed in 49 states, operating pursuant to the Liability Risk Retention Act of 1986 (15 USC 3901 et seq). Underwritten by the “A” Rated Praetorian Insurance Company, Odds On Promotions has paid out over $40,000,000 in cash and prizes to contest and promotion winners worldwide. To learn more about prize insurance, contests and promotions, or to request a free quote, call 888-827-2249 or visit their website at http://www.oddsonpromotions.com.