Jacket: The Trials of a New Jersey Criminal Defense Attorney

Memoir by John W. Hartmann—Criminal Defense Attorney and the Youngest Republican Ever Elected to the State Assembly—Provides a Candid and Humorous Look Inside the NJ Criminal Justice System and Trenton Politics 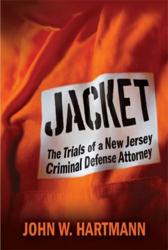 Jacket: The Trials of a New Jersey Criminal Defense Attorney

Hartmann hits the perfect combination of trial strategy and personal anecdotes that makes for a great read.

Book Debuts Nov. 5, 2012, From the Publisher of the New York Times Bestseller Boardwalk Empire: The Birth, High Times, and Corruption of Atlantic City

Central to Jacket is the case of a man who has spent three years behind bars for a robbery he obviously didn’t commit. As Hartmann recounts his effort to free the client on appeal, he dishes out amusing anecdotes from his life in law and politics, shares Garden State trivia, and offers advice on how to start a legal practice, prepare clients for trial, cross-examine witnesses, pick juries, and make prison hooch.

“In writing Jacket I wanted to provide a ‘from the trenches’ view of the criminal justice system in New Jersey—from the street to the courtroom to the verdict,” Hartmann explained. “The system is never pretty, it’s not always fair, and after reading Jacket, it’s up to the reader to draw his own conclusion as to whether or not it works.”

Several prominent attorneys have praised Jacket. Thomas Mesereau, the lawyer who acquitted Michael Jackson of child sexual abuse charges in 2005, called the book “a candid, colorful, and penetrating exposé of the gritty realities in our criminal justice system,” while Nicole “Snooki” Polizzi’s attorney Raymond Raya said, “This book will change your life—especially if you’re charged with knocking over a liquor store in the Garden State.” According to Raya, “Hartmann hits the perfect combination of trial strategy and personal anecdotes that makes for a great read.”

“I was drawn to the honesty and humor in Jacket,” said John B. Bryans, Hartmann’s editor at Plexus. “John Hartmann invites controversy and clearly enjoys skewering sacred cows, but he’s also charmingly self-deprecating and passionate about his work defending the accused. His colorful descriptions of people he’s met in and around Trenton’s streets, courts, and prisons can’t help but make you laugh out loud.”

John W. Hartmann is an attorney with a private practice near Princeton, in Mercer County, New Jersey, where he lives with his wife and two children. He has written one other nonfiction book, The American Partisan (Burd Street Press, 2000), and is currently at work on his first novel.

Jacket: The Trials of a New Jersey Criminal Defense Attorney (216 pp/softcover/$14.95/ISBN 978-0-937548-75-2) can be pre-ordered at Amazon.com, and the publisher’s website at http://www.plexuspublishing.com. The book will be available beginning November 5, 2012, in better bookstores through Baker & Taylor, through all major online booksellers, and by contacting the publisher directly at (609) 654-6500 or info(at)plexuspublishing(dot)com. For more about Jacket, including a schedule of author appearances, visit http://www.plexuspublishing.com.