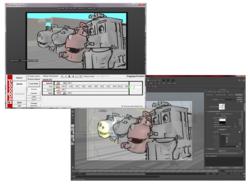 Image showing the automatic conversion from Redboard to Autodesk's Maya

Ludorum have adopted Redboard's storyboarding and animation pre-production system for their 4th Series of Chuggington. Chuggington follows the exciting adventures of young trainees Wilson and his friends Brewster and Koko as they learn to ride the rails. The show is broadcast on CBeebies and is a truly global property aimed at 2-5 year olds, shown in over 178 territories and translated into 27 languages.

Redboard is a revolutionary pre-viz technology that allows you accurately plan and manage your animation production. Starting at the pre-production and storyboarding stage, you can seamlessly transfer design, camera and scene data into your CG workflow. Much more than a simple storyboard application, Redboard benefits directors and producers alike by maximising the clarity of pre-production data, thereby eliminating the need for time-consuming corrections later in the process.

The Head of Technology at Redboard, Neil Marsden, explained some of the issues involved: “Chuggington represents a significant challenge from a pre-production perspective. There are a huge number of characters who inhabit a complex dynamic world with a considerable number of sets and environments. In addition most of the main characters need to operate on a seemingly limitless number of tracks. Ludorum wanted an easy-to-use solution that would allow them to accurately transfer the storyboards and pre-production data to their studio in China.”

Ludorum considered a number of other software tools for their pre-production but Redboard's ability to co-ordinate the pre-production aspects for Chuggington gave it a significant advantage. Using real-time game engine technology, Redboard seamlessly integrates with high-end production tools like Autodesk's Maya and Apple's Final Cut Pro to create a streamlined production pipeline.

Jacqueline White, the producer for Chuggington, added “We needed a pre-production solution that would allow us to retain the flexibility that Chuggington requires but would ensure that the storyboards and animatics we created here in the UK could be quickly and accurately delivered to our sub-contracting studio in China. Redboard provided the solution.”

Redboard has been developed by Hibbert Ralph Animation, an award winning animation studio, based in London and benefits from more than thirty years of animation production experience. Redboard has already helped to create several thousand minutes of TV series production including Fireman Sam for HIT Entertainment, The Hive (currently airing on Disney Junior) and Tractor Tom for Contender Entertainment. Redboard is ideally suited to multi-studio co-productions, as its revolutionary technology and ability to create detailed and accurate data files facilitate good decision making early in the storyboard and planning stages.

Redboard is available immediately for CG television series productions as a complete service package, including software licenses, installation, training and support. Licenses will run for the period of the project and prices will be calculated based on the length of the project. Film packages are also available on request. See http://www.redboard.tv for more information or contact info(at)redboard(dot)tv

ABOUT REDBOARD AND HIBBERT RALPH ANIMATION
Redboard is a wholly owned subsidiary of Hibbert Ralph Animation Ltd (HRA), an award-winning animation production company based in central London. HRA is one of the UK’s top animation studios producing television and cinema commercials as well as working on TV series and feature work. The company was founded in 1982 by Jerry Hibbert and has since won over 90 top awards for its work. More recently HRA has focused on producing innovative software tools for animation production. For more information visit http://www.hibbertralph.com