Gold Prospectors Association of America is pleased to announce its 2013 Gold & Treasure Expo schedule. The GPAA will hold 13 shows, including some exciting new locations such as Quartzite, Ariz, which will feature a special three-day event. 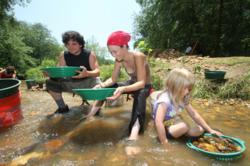 Gold prospecting just got going 150 years ago and they’ve been diggin’ gold ever since. Only 10 to 20 percent of the gold on this planet has been recovered. The rest of it is still sitting in the ground waiting for us to come and get it.

The Gold Prospectors Association of America is pleased to announce its 2013 Gold & Treasure Expo schedule.

The GPAA will hold 13 shows, including some exciting new locations such as Quartzite, Ariz, which will feature a special three-day event.

“Expo tells you straight up that we’ve got vendors ready to sell you products,” said Trade Show Manager Gary Sturgill. “That’s where you’re going to find the latest and greatest new equipment and the vendors are going to demonstrate how to use it.”

Sturgill said education will take on a pivotal role in 2013 with much more focus on teaching people how to prospect and pan for gold.

“We’re actually going to have a few different guest speakers who we haven’t had before,” he said.

Wegner, who is PLP vice-president, delivers informative talks on the importance of land rights, your right to prospect, stake claims and mine on public lands. He talks about how some of those rights have been eroded under all levels of government including the federal government and even the United Nations under Agenda 21, for example.

“Walt gets a lot of people and they are well-informed when they leave,” Sturgill said.

The Expo will cover more than just gold, including gem and treasure hunting.

Last April In Las Vegas, gem hunter and Gold Prospectors magazine columnist Blue Sheppard spoke about where to find and how to mine precious gems. He also had many precious gemstones on display at the show and the GPAA is expecting him back in 2013, Sturgill said.

“Blue gave a nice lecture on gemstones,” he said.

The Gold & Treasure Expos will also bring in local speakers to highlight gold prospecting topics that vary from region to region.

“Venue to venue, we’ll have local gold prospectors talking about where to look in their locales because they know the areas,” Sturgill said.

“We have a lot of people who are watching ‘reality’ TV shows thinking they’re gonna go get rich quick. We’re going to show them there is still a lot of gold in the ground; there’s a lot of gold left to go get, but it’s not as easy as you’d think,” he said.

“We’re going to show you where to look, what machinery you should be using, how to use some of this equipment and get you signed up with a GPAA membership so you have access to more than 350 gold-bearing mining claims we have across the country, where you have the opportunity to find your own gold. You’ll have somewhere to go to get some gold.”

The GPAA has also stepped up to the plate to meet the requests of showgoers for more vendors and a greater selection of small-scale mining equipment.

“We’re going into locales that have a lot larger populations and larger venues with more room for more vendors,” Sturgill said.

Another change is that all the East Coast shows next year will be held on Fridays and Saturdays — and not Sundays.

So, why should you get off your couch or your claim to come to the show?

“The No. 1 thing is the seminars. You can always learn and if you’re not learning something new everyday, you’re not tryin’ hard enough. We’ve got great seminars going on. You’re going to learn from them and that’s gonna make your gold recovery even better,” Sturgill said.

Sometimes at the shows greenhorns ask ‘Hasn’t all the gold been found?’ or ‘Didn’t gold prospecting die out 150 years ago?’

“Gold prospecting just got going 150 years ago and they’ve been diggin’ gold ever since. Only 10 to 20 percent of the gold on this planet has been recovered. The rest of it is still sitting in the ground waiting for us to come and get it,” Sturgill said. “We’ll dredge Earth first and we’ll get to the other planets later.”

And, as far as the stereotypical gold prospector as a stooped-over old white guy with a long grey beard, Sturgill shatters the myth: “We’ve got members who are nine years old that can out pan most of those guys with the beards,” he said with a chuckle.

Lots of younger men, women and young families love to prospect and pan for gold, Sturgill pointed out. One of those younger women is Gold Fever host Tom Massies’s daughter, Kia, who often appears on episodes. Gold Fever remains one of the highest rated shows on Outdoor Channel.

“People from all walks of life come to our shows. Gold doesn’t show any prejudice; it’ll let anybody dig it up. We’ve got wide demographics. We’ve got people as young as their 20s coming in with their kids in baby carriages and signing up for the GPAA. We’ve got people who realize the value of a Lost Dutchman’s Mining Association membership. For a gold prospector, the LDMA is better than KOA. You can’t go diggin’ holes in the ground at a KOA. The LDMA offers traditional mining camps for prospectors,” Sturgill said.

The 2013 Gold & Treasure Expos will have a special focus on Lost Dutchman’s Mining Association and the value, freedom and opportunities it offers LDMA members. There are currently 13 LDMA properties in Arizona, California, Oregon, Colorado, Nevada, North Carolina, South Carolina, Michigan and Georgia.

The Gold & Treasure Expos are open to the public. Admission is $5 or FREE if you pre-register online at least two weeks before show dates. The first 100 paid attendees will receive a FREE vial with some placer gold.

For directions to the Gold & Treasure Expo venues, please go to http://www.GoldandTreasureShow.com.

Want to cover all your bases and stay up to date on all the latest GPAA events information? Join the GPAA at http://www.goldprospectors.org/join and receive the new GPAA Mining Guide with access to more than 350 gold mining claims, the GPAA national magazine, Gold Prospectors, and the Pick & Shovel Gazette, your source of small-scale mining news.