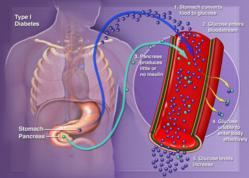 Health literacy is the first step in preventing diseases and conditions. We ask all of our viewers on YouTube and Facebook to watch and share these animations to raise awareness of diabetes and other diseases.

November marks the observance of National Diabetes Awareness Month. According to the National Institutes of Health, diabetes is the seventh leading cause of death in the United States and affects 25.8 million people of all ages - approximately 8.3 percent of the U.S population with 7.0 million of these individuals currently undiagnosed.

Diabetes is currently the leading cause of kidney failure, new cases of blindness among the adult population and atraumatic lower-limb amputations. It is also a major contributing factor in stroke and heart disease.

“Recent estimates project that as many as 1 in 3 American adults will have diabetes in 2050 unless we take steps to stop diabetes. It is our responsibility to ensure that our youth have the right guidance and resources to get healthy,” said Larry Hausner, CEO, American Diabetes Association.

There are three main types of diabetes. Type 1, type 2 and gestational diabetes are all marked by high levels of blood sugar caused by a deficiency in insulin production, insulin action or a combination of both. The disease is serious but those that work closely with a support network and their health care provider can take measures to control their diabetes and reduce the risk of serious complications.

“Today, nearly 26 million adults and children in the U.S. have diabetes and an additional 79 million have prediabetes,” said Geralyn Spollett, MSN, ANP-CS, CDE, President, Health Care & Education, American Diabetes Association. “This month, we hope to raise the profile of this insidious disease in the hearts and minds of people here at home, and around the globe.”

To raise health literacy among the population, Nucleus Medical Media will promote and share its 3D animations of diabetes on the company’s popular YouTube channel, which receives more than 70,000 views each day, and on its Facebook page, which currently has 10,000+ Likes.

“Health literacy is the first step in preventing diseases and conditions,” said Ron Collins, Co-founder and CEO. “We ask all of our viewers on YouTube and Facebook to watch and share these animations to raise awareness of diabetes and other diseases.”

If you are a nonprofit organization interested in using medical animations for community-based or faith-based health presentations on diabetes, email Nucleus at DiabetesAwareness(at)nucleusinc(dot)com with “Diabetes Information” in the subject heading.

About Nucleus Medical Media
Founded in 1997, Nucleus Medical Media, Inc. is an award-winning creator of medical illustrations, medical animations, and interactive multimedia for the publishing, legal, healthcare, entertainment, pharmaceutical, medical device, and academic markets. Nucleus’s clients and partners include WebMD, McGraw-Hill, Dr. Oz, EBSCO Publishing, and thousands of other businesses in new and traditional media. Nucleus employs the world’s largest team of graduate-degreed medical illustrators, and has a Medical Review Board with more than 75 physicians and nurses. For more information, click here to visit our website.