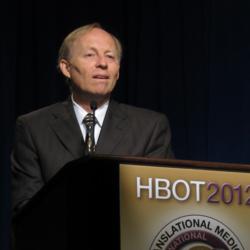 We announce this Veteran's Day, that we have a promising treatment, utilizing scientific methods of precise dosage and protocol, that may permanently curtail TBI and PTSD symptoms, returning veterans to a more normalized life, states Dr. Harch.

Among Veterans of the wars in Iraq and Afghanistan, Traumatic Brain Injury (TBI) and Post Traumatic Stress Disorder (PTSD) are the leading causes of disability, labeled, "The signature wounds of the war on terror".

As a result of their experiences in both wars, soldiers often suffer from unbearable headaches, dizziness, depression, nightmares, and violent mood swings. Dr. Harch, a leading expert in emergency medicine and hyperbaric treatment, has pioneered brain injury research for over two decades. His credentials, studies, and reputation are known worldwide.

"We announce this Veteran's Day, that we have a promising treatment, utilizing scientific methods of precise dosage and protocol, that may permanently curtail TBI and PTSD symptoms, returning Veterans to a more normalized life," states Dr. Harch.

Chad Battles, an Army E4 machine gunner specialist, says of his recent HBOT treatment with Dr. Harch, "I didn't know what to do. The VA tried, but couldn't relieve me of my sleepless nights, my recurring nightmares, loss of memory, and chronic headaches. I found Dr. Harch and he treated me pro bono. After 40 'dives', my memory came back, my headaches were gone, and I am able to sleep through the night. He basically gave me my life back!"

Following publication of the first case of HBOT (Hyperbaric Oxygen Therapy) benefiting veterans with TBI and PTSD in 2009, Dr. Harch and colleagues published confirmatory evidence in January of this year in the prestigious peer-reviewed Journal of Neurotrauma. http://www.liebertonline.com/doi/abs/10.1089/neu.2011.1895

In September 2012, Dr. Harch's research team showed that the HBOT treatments generated improvements in depression and anxiety, PTSD, and memory that resulted in quality-of-life improvements for Veterans. The study further indicated, statistically, that a "chance explanation" for the improvements was less than "one in a quadrillion". http://online.liebertpub.com/doi/abs/10.1089/neu.2012.2608

The Department of Defense (DoD), the Veteran's Administration (VA), and the National Institute of Mental Health (NIMH) recently pledged $100 million for further PTSD and TBI resarch and treatment, impacting over 550,000 brain injured veterans.

HBOT (Hyperbaric Oxygen Therapy) was first used by the U.S. Navy for treatment of divers experiencing "the bends".

Here's how HBOT works: Increased air pressure forces oxygen into the fluids and tissues of the body, significantly augmenting the usual oxygen delivery system through the blood. This oxygen infusion can reach inaccessible, dormant cells, restoring their normal function. In addition, research has shown that HBOT increases the amount of stem cells released from one's bone marrow, healing the injury with new, healthy cells.

About Dr. Harch
Paul G. Harch, M.D. is the foremost leader in hyperbaric medicine. Dr. Harch leads the nation with his treatment of military veterans suffering with PTSD (Post Traumatic Stress Disorder) and TBI (Traumatic Brain Injury). Dr. Harch is world renown for his clinical research, dedication, and his specific protocols in treatment with oxygen. His bestselling book, "The Oxygen Revolution", published by Hatherleigh Press, demonstrates the remarkable and often overlooked life and quality-of-life healing potential provided by using oxygen as a drug. A drug to heal a variety of acute and chronic conditions. HIs testimony before the U.S. Congress has led to significant advances in hyperbaric medicine treatment.