Original War Bonds from around the World offered by Scripophily.com 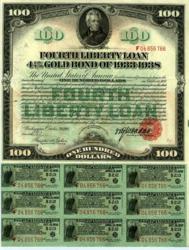 Liberty Bonds were issued by the U.S. Government to help finance the debt of WWI.

War Bonds offer a truly unique glimpse of history in some of the world’s most dynamic and iconic periods. “These bonds exemplify the need for countries to raise money to start, maintain, and finish wars and to rebuild afterwards” says Bob Kerstein, CEO and Founder of Scripophily.com.

The ability to invest in war bonds allowed for citizens to support the cause and feel involved in their government’s military activities. “These costly wars contributed so greatly to the history and character of the world”, Kerstein added. Moreover the financial support by private citizens often coincided with the expression of pride and a sense of patriotism in supporting their initiative. The importance of war financing over the years has been a major factor in the ultimate outcome of the war.

Scripophily.com - The Gift of History is the internet’s leading buyer and seller of collectible stock and bond certificates with over 18,000 items for sale. Scripophily.com also has items on loan for display in the Smithsonian’s Museum of Financial History in New York. The company has been featured on CNBC, USA Today, Associated Press, Reuters, Bloomberg, Nightline, Today Show, Baltimore Sun, and the Washington Post and in many other media publications. The company also offers an old stock research service at OldCompany.com and offers high resolution scans for publications.

Scripophily.com / Old Company Research Service is the successor company to all material published by the Marvyn Scudders Manuals, the Robert D. Fisher Manuals, and the Herzog & Co., Inc. obsolete research services, which have been performed continuously since 1880.

Confederate Bond from the Civil War