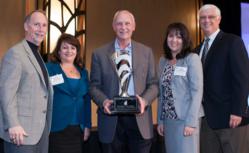 Now in our fifteenth year of holding the Richard A. Griesbach Excellence in Airport Concessions Contest, ACI-NA congratulates Sacramento as this year’s overall award of excellence winner

“Now in our fifteenth year of holding the Richard A. Griesbach Excellence in Airport Concessions Contest, ACI-NA congratulates Sacramento as this year’s overall award of excellence winner,” said ACI-NA President Greg Principato. “These award-winning entries help promote the innovative spirit within the airport concessions industry as well as showcase the unique products and services that airports are providing throughout North America.”

Zenola Campbell is responsible for programming one of the largest airport concession programs in North America. Her coordination and leadership have taken the concession program at DFW from $206M in Gross Receipts in 2006, to 267M in 2011, a 30% increase during a challenging business climate. Under Campbell’s leadership, DFW has achieved a top-tier program for the airport industry and she continues to build on that success. Working towards her goal to make DFW “The Healthiest Airport in North America,” she has partnered with the American Heart Association to promote healthy options at concession locations throughout the airport, as well as a new walking path and yoga studio in Terminal D.

“We are proud to honor Zenola Campbell as this year’s ACI-NA Concessions ‘Person of the Year,’” said Principato. “Zenola’s tenacity and creative approach to concessions management and customer service at DFW serve as an inspiration to her colleagues.”

This year’s contest received a record-breaking 180 nominations from airports of all sizes throughout the U.S. and Canada. In addition to the Greisbach award, 38 other awards were presented in the following categories:

Richard A. Griesbach Award of Excellence

Concessions Person of the Year

Innovative Use of Non-Traditional Retail Space

About ACI-NA
Airports Council International - North America represents local, regional and state governing bodies that own and operate commercial airports in the United States and Canada. ACI-NA member airports enplane more than 95 percent of the domestic and virtually all the international airline passenger and cargo traffic in North America. More than 350 aviation-related businesses are also members of the association, which is the largest of the five worldwide regions of Airports Council International.