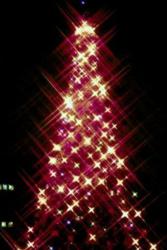 Festivities throughout the day delight the community and holiday visitors alike, and Santa and Mrs. Claus dazzle the children.

Mayor Max of Idyllwild, California, and his Office and Chief of Staff, Phyllis Mueller, invite you to attend Idyllwild’s 52nd Annual Christmas Tree Lighting Ceremony on Saturday, November 24th -- the Saturday of the Thanksgiving holiday weekend.

The annual Christmas Tree Lighting Ceremony in Idyllwild, California continues its traditions with an old-fashioned Christmas celebration. Festivities throughout the day delight the community and holiday visitors alike.

Santa and Mrs. Claus will arrive by fire engine to spend the day and listen to the children’s holiday wishes and dreams. Santa’s workshops are scheduled from 12-2 p.m. and start again at 3:30 p.m. to approximately 5:30 p.m. or until all the children have completed their visits with Santa and Mrs. Claus. Each child receives a candy cane from Santa.

Christmas carolers from the Grammy-nominated vocal ensemble, The Caroling Company, and also the local Idyllwild Community Choir can be heard throughout the town all day and during the Tree Lighting Ceremony. There will also be live Christmas music played throughout town.

Stores open at 10:00 a.m. and stay open a little later to accommodate the holiday-shopping enthusiasts. The stores and town are decorated for the holiday festivities.

Downtown streets (Village Center and Park Lane) will be closed from 8 a.m. to 7 p.m. so that non-profit information booths can offer their holiday goodies galore to the public—including baked goods and other holiday food items, holiday wreaths, ornaments and other homemade items, balloons, quilts, pet adoption opportunities, raffle items, and much more.

In conjunction with the Pine Cove and Idyllwild Fire Departments, the Love Train from the Idyllwild HELP Center will be collecting canned goods and toys for the less fortunate.

The day culminates with the Tree Lighting Ceremony which begins at 4:15 p.m. and is emceed by Frank Ferro, one of Idyllwild’s most cherished community members. ‘American Idol’ contestant and Idyllwild native Casey Abrams will be in attendance. The Ceremony includes the following:

Mayor Max, Idyllwild’s canine mayor, will also be attending the event with regular visits to the children at Santa’s workshop. To find out more about Mayor Max and the Tree Lighting Ceremony, visit http://www.mayormax.com.

Phyllis Mueller, Chief of Staff
Office of the Mayor of Idyllwild
951.659.0283
Email >
Follow us on
Visit website