Scientology Steps Up Fight Against Drugs And Crime In Los Angeles 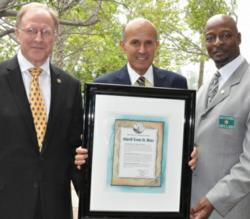 Sheriff Leroy Baca is presented with a certificate of appreciation for his leadership in drug education and prevention.

Featured in the newly released brochure, Scientology: How We Help—The Truth About Drugs, Creating a Drug-Free World, cooperation between law enforcement, community activists and religious groups throughout the city has served as a model for communities everywhere in fighting drug addiction and crime.

The LAPD distributes thousands of copies of The Truth About Drugs booklets at its stations across the city and holds drug prevention community activities such as “National Night Out,” an annual initiative that fosters crime prevention activities to create safer neighborhoods through community partnerships.

A police station commander in Los Angeles described the value of the Truth About Drugs program in his precinct: “The educational pamphlets and videos have been invaluable in educating the community on the negative repercussions that illegal drugs have on society.”

A sergeant who uses the materials daily in his work said: “Everything in the Truth About Drugs curriculum is pure gold. There is no message about drug abuse that is more penetrating than what this program provides—we can’t top it.”

In 2011, the Los Angeles County Sheriff directed members of his Multi-Faith Clergy Council to undergo training on the Truth About Drugs education curriculum, encouraging them to bring the program to their neighborhoods. Nearly 200 clergy representing a broad range of faiths, including Jews, Muslims, Christians and Sikhs, participated in the four-week course.

The Sheriff described the results of his department’s implementation of the program: “The Truth About Drugs education program that the Church of Scientology supports means everything to the safety of our schools and neighborhoods. It is a tremendously successful program worldwide and particularly needed. This is why we have trained a corps of our own officers in the use of this unparalleled program.”

About "Scientology: How We Help - The Truth About Drugs"

The Church of Scientology supports Truth About Drugs, one of the world’s largest nongovernmental drug education and prevention campaigns. It has been conclusively proven that when young people are provided with the truth about drugs—factual information on what drugs are and what they do—usage rates drop commensurately.