For every new reservation booked now, with the stay completed before the end of the year, the Inn at Warner Hall will donate $50 in the guest’s name to one of three non-profits. The charities include Gloucester’s Bread for Life Community Food Pantry, the Gloucester Mathews Humane Society and the Middle Peninsula Chapter of the Alzheimer’s Association. 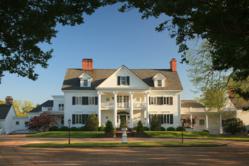 The Inn at Warner Hall is located in Gloucester, Va. Some of the most notable names in American history are direct descendants of Augustine Warner, including President George Washington.

In honor of November’s National Philanthropy Month, the Inn at Warner Hall in Gloucester, Va. is hosting a fundraiser to benefit three charities.

For every new reservation booked now, with the stay completed before the end of the year, the Inn at Warner Hall will donate $50 in the guest’s name to one of three non-profits – Gloucester’s Bread for Life Community Food Pantry, the Gloucester Mathews Humane Society or the Middle Peninsula Chapter of the Alzheimer’s Association.

Listed by both the National Register of Historic Places and the Virginia Historic Landmarks Commission, Warner Hall continues to be of major architectural and genealogical significance in American history. Notable American figures, including President George Washington, are direct descendants of Augustine Warner, who patented the property in 1642.

Guests will choose which charity the donation will support. Each night stayed counts toward the total. That is, stay for two nights and the Inn at Warner Hall will donate $100.

Of note: the Inn at Warner Hall is hosting a Wreath Building and Christmas Crafts event on December 1 for lodging guests. Rooms are still available for that weekend.

The property is located three and a half miles from U.S. Route 17 and Colonial Williamsburg is 30 minutes away. The battlefields of Yorktown are within 15 minutes and America's first settlement, Jamestown, is a 50 minute drive along the scenic Colonial Parkway. The state capitol of Richmond, the Norfolk Harbor, and Virginia Beach are within an hour's drive.