WHY? - The Ballroom at the Taft Theatre - Friday February 8th!

Get Your Tickets to See WHY? With Astronautalis & Dreamtiger Now! 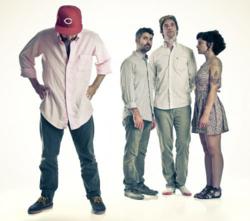 Cincinnati indie hip hop heroes WHY? return home to headline a show in The Ballroom at the Taft Theatre on Friday February 8th with Astronautalis and Dream Tiger.

General Admission tickets, $12 ADV and $15 DOS (plus applicable fees), are on NOW at http://www.ticketmaster.com, http://www.tafttheatre.org, the Taft Theatre Box Office and all Ticketmaster outlets including select Kroger stores. Charge by phone at 1.800.745.3000.

Nipping at the ragged heels of their eagerly devoured Sod in the Seed EP, WHY? at last unleash their fifth long-player, a meticulous work of morbid fascination and offbeat romanticism dubbed Mumps, etc. Though there is a mysterious sickness (perhaps of the mind) that lurks about these thirteen songs, one might also imagine the title as describing the musically swole state of these three Midwestern men as they bring their sound into glisteningly buff focus. Yoni Wolf, brother Josiah and Doug McDiarmid are in the pocket, the unbreakable rock core at the center of a spinning ball of sonic kaleidoscopie. And all the things we love about them are still true: the grinning sun-warped choruses, that jangly Western lope, those confessionals cut with wry wit and crude details, set dancing down the odd knots of complex poetic daisy chains. It's just that ... well, all of it sounds better than ever this time around.

Part of that is due to how Mumps, etc. was made. Far from their native Cincinnati, the fellas spent a month and a half in the Denton, Texas based studio, The Echo Lab. They showed up with a pile of demos suspected to be nearly done—some five years in the making—but their aspirations evolved in the shadow of the great University of North Texas music school. Reaching out to a professor therein, they wrangled an ace crew of green-and-white gunslingers to exact their wild schemes: a string quartet, an eight-person choir, woodwinds, horns. The whole set was recorded to two-inch tape (no loops), produced by the Wolf brothers, and mixed in Atlanta by Graham Marsh (Cee Lo Green, Katy Perry) with Yoni. Thus every song pops exactly as it should, smearing genre with pointed intent until the end result became an articulated work of unusual artistry and catchiness—a WHY? record, naturally.

We're not here to tell you what to like; the highlights are many. There's the opener "Jonathan's Hope," rattling forth over a pile of cooing ladies and crunching percussion, its measured optimism leveled at the songs that follow. There's "Waterlines," which folds idyllic harps figures into a darkly shimmering beat while Yoni drops backwards brags—"Rocking soccer socks with sandals like, 'Yeah, bro.'"—and dissects his public persona. "White English" bounces over some kind of mutant mariachi dub, a continuation of the coiled grooves WHY? devised for Serengeti's Family & Friends (2011).

Still, we are fairly certain that "Paper Hearts" is something extra special. Offering but a single two-and-a-half minute verse, the song is gorgeously detailed and surprisingly uncoded, unspooling as it goes a gut-wrenching end to an important relationship, and shining harsh light on a narrator who often likes to hide his truths in acts of on-album villainy. So when Mumps, etc. ends one track later, with Yoni promising providence over his own death while pizzicato strings brighten the closing corners, we understand both the sad futility and the unabashed hope wrapped up in that statement. And, along with the taut arrangements and imaginative musicianship, it's that skewed but forever winking eye on the human condition that keeps us wrapped up in WHY?

Having started in music over 15 years ago as a battle rapper, Astronautalis’ roots are planted firmly in hip-hop. However, the sounds and styles on his albums are an animal not so easily caged, and his latest release, “This Is Our Science” is no exception to that tradition of wild genre bending. Like previous records Bothwell uses that limitless approach to aid in his vivid storytelling, but where “This is Our Science” takes a turn from tradition, is in the subject matter itself. While previous records read like historical fiction, documenting the lives of the bygone, the footnotes, and the forgotten, “This is Our Science” is pure autobiography. From the pounding drums and thick synths of the record’s opener, “The River, The Woods”, the roots in rap are clear. But, that foundation quickly crumbles as the choir swells on the dark electronic gospel of the title track, “This is Our Science”. While songs like undeniably catchy, “Contrails” (featuring Tegan Quin) and the epic rock anthem, “Secrets On Our Lips” carry an astounding pop sensibility, there is something unnerving behind those big choruses and driving drums. In fact, there is something hiding behind every corner of this record, and much like the road Astronautalis traveled to make it, there is no map, no guide book, no way to prepare yourself, all you can do is press on forward and see what is waiting for you just around the bend.