SwipeSpeare™, the new app published by Golgotha Press, Inc., is promising to be much more than just an ease-of-use reading tool 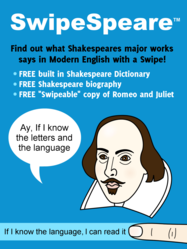 The SwipeSpeare ™ app has just arrived for Apple tablets and iPhones, and will give readers of Shakespeare an intuitive interface that lets them swap Shakespearean English passages for modern English versions of the text, and vice versa.

“Students and teachers of Shakespeare suffer the slings and arrows of older English on a daily basis,” said Scott LaCounte, the co-owner of Golgotha Press, “but it doesn't have to be that way. We've updated the language and built an interface that makes switching between old and modern English a breeze.”

“It’s the app we would have wanted in high school and college,” he added.

The application will be free and comes preloaded with a swipeable copy of Romeo and Juliet. A Shakespeare biography and a dictionary of some of the more difficult Shakespearean words are also included.

While book series such as Sparknotes' “No Fear Shakespeare” have tried to bring a new generation of readers to Shakespeare's work, they do so by placing the modern English next to the Shakespearean English in a clunky fashion. SwipeSpeare ™ will allow tablet and Smart phone owners to easily swipe a section of content, rather than switch back and forth between paragraphs, potentially losing their places, and their patience.

Kevin LaCounte, the brother of Scott LaCounte and co-owner of Golgotha Press, was convinced that a new way of doing things was necessary. “Other modern Shakespeare apps and books put the modern text in a separate column,” he said. “It’s distracting. Using a swiping motion to see what the text says in modern English seemed like a more natural fit.”

Other app features that will be available for purchase are comprehensive study guides for students and step-by-step lesson plans for teachers. Eight Shakespeare plays will also be available at launch.

“We work closely with teachers, parents, and students. We listen carefully to what they like and don’t like,” said Kevin. “Our goal is to give them a resourceful tool that's not only useful, but also cheap.”

Golgotha Press is working to have the app for Windows and Android out in December and January, respectively. By early 2013, the company will have every Shakespeare play ready to read in modern English. Additional plays are purchasable from within the app for $1.99.

SwipeSpeare ™ is part of the BookCaps ™ Study Guide Family. BookCaps ™ was started over two years ago and has had several best sellers. The company is co-owned and operated by brothers Kevin and Scott La Counte.