Rust Gets Toyota Recalling Its Tacoma; Hub on Wheels Advises Car Owners to Deal With Any Other Car Rust Problem with Rusterizer

Because of possible corrosion development on its certain part, Toyota decided to recall its 2001-2004 models of Tacoma. Meanwhile, stating that rust cars are susceptible to rusting, Hub on Wheels advised all car owners to prepare a Rusterizer for a prompt, safe and effective rust treatment. 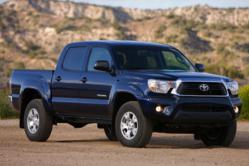 ...wanting to help them protect their vehicles from corrosion, it also advised them [car owners] to prepare a Rusterizer.

Car company Toyota was scheduled to recall its Tacoma pickups. As said in a report from cbsnews.com, it's all because of corrosion. And stating that the said recall shows that cars, in one way or another, are susceptible to rusting, Hub on Wheels advised all owners to prepare Rusterizer for an always prompt, safe and effective car rust treatment.

Based on the CBS report, the recall was made because of the possible rusting that could take place in the metal-carrier of a spare tire. As it said, with the winter coming in and the exposure to road salt to melt snow and ice, the carrier is susceptible to corrosion. More so as the metal may not have been properly coated with phosphate, it was stated.

However, the report also said that the recall only targets 150, 000 Toyota Tacoma pickups that were made from 2001 until 2004. And for the trucks to be inspected and its metal-carrier to be replaced, if necessary, it was specified that the pickup must be sold or registered only in 20 determined cold-weather states, plus DC.

Meanwhile, according to HubOnWheels.org, while upfront the recall was a good thing only for Tacoma owners, it actually benefits all the other car owners. It said that, in a way, it warned them about the vulnerability of cars to rusting. And wanting to help them protect their vehicles from corrosion, it also advised them to prepare a Rusterizer.

As it said, with a rust remover ready, one could implement a prompt rust treatment. But among all the rust removal products, it suggested that Rusterizer is the best as it offers not only effective but also safe rust treatment.