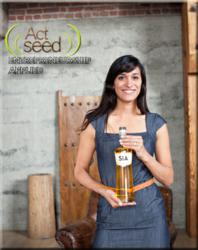 "It's been a labor of love and one I've enjoyed every step of the way." (Carin Castillo, Founder of SIA Scotch Whisky)

ActSeed welcomes Carin Castillo and her new venture, SIA Scotch Whisky to the ActSeed community as she pursues seed capital through a crowdfunding project on Kickstarter.

After more than 100 blind tastings, researching over 80 distillers and a decade-long dream of creating a new blend of Scotch, Carin Castillo is almost to the first major gate in her journey to introduce the next great Scotch to the world. In approximately one month, Castillo will receive her first 250 cases of SIA Scotch Whisky.

Like more than half of all entrepreneurs, Carin has self-funded the first phase of her company. She invested a significant amount of time to learn what her customers want.

"I've funded my company by bootstrapping (working a second job doing freelance design to pay for all of the research and development going into developing this new brand of Scotch Whisky," said Castillo. "It's been a labor of love and because there is no guideline or book about how to do this, it's been a huge learning curve, and one I've enjoyed every step of the way."

ActSeed champions "main street entrepreneurship" – startups that are not necessarily in the Silicon Valley mold, but have enormous potential to become a job creator and net contributor to our struggling company.

Like most startups, SIA Scotch Whisky is not the prototypical venture capital investment, but now non-tech startups have ways to attract seed funding from thousands of small donations through a crowdfunding site.

"We applaud the discipline and tenacity that Carin has shown in laying a firm foundation for her new business," said Bill Attinger, CEO of ActSeed. "SIA Scotch Whisky is now tapping an innovative source of funding through the Kickstarter community, and we expect Carin to achieve her funding goal soon."

About SIA Scotch Whisky
Produced and bottled in Scotland, SIA SCOTCH WHISKY is an exciting, new and modern spirit, ready for distribution in the U.S. To learn more, please visit http://www.siascotch.com.

About ActSeed
ActSeed is a national online community for startups, early stage companies and small businesses. Since 2009, ActSeed has been helping thousands of entrepreneurs create jobs and build young companies by providing a proprietary "business blueprint" and connecting them to investors and business services that are critical for survival and growth. To learn more, please visit http://www.actseed.com.
If you would like more information about this topic or to arrange an interview with Bill Attinger, please send an email to media(at)actseed(dot)com.