2013 Bon Jovi Tickets: Because We Can Concert Tour Tickets on Sale Now at TicketLiq.com

Bon Jovi fans interested in getting their hands on presale tickets and exclusive VIP packages to the 2013 "Because We Can - The Tour" should pay a visit to http://TicketLiq.com. This is fifteenth concert tour by Bon Jovi in support of the band's twelfth studio album What About Now. 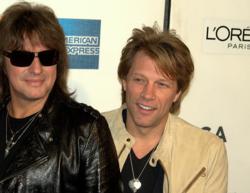 Legend of rock, Jon Bon Jovi, the lead singer of Bon Jovi, recently announced the Because We Can 2013 tour. Presales, VIP tickets and backstage passes to these exclusive shows are currently available at http://TicketLiq.com/bon-jovi-tickets or by calling 866-943-1567.

Bon Jovi is back on tour in support of their twelfth studio album, What About Now, released in March 2013. The tour covers five continents and countries the band has never ventured to before. After spending 2012 focusing on solo projects, Jon Bon Jovi is hitting the road again.

Kicking off on Feb 9, 2013, Uncasville, CT, Mohegan Sun, the tour makes its way to arenas and stadiums from coast to coast, including Detroit’s Ford Field on Thursday, July 18.

Ensuring that there is truly something for every fan, Bon Jovi is offering a wide range of ticket options for the show, starting at $19.50 (plus service charges).

“We’re thrilled to be hosting Bon Jovi at Ford Field in 2013,” said Tom Lewand, President of Ford Field and the Detroit Lions. “It was important to provide flexible ticket options for this show…and with seats starting at just $19.50, Bon Jovi fans in Detroit will be able to see one of the greatest original rock bands of our time at an affordable price.”

Buying Bon Jovi concert tickets and attending a Bon Jovi tour is a very special experience, as the band takes every single fan in the crowd on a glorious and nostalgic ride through the 1990s and into the intriguing early years of the modern millennium before dropping them off in the present date. A full-fledged public sale means that online shoppers around the globe are anxiously waiting for the opportunity to purchase Bon Jovi public sale tickets.

The tricky part can be finding a reputable online place to do so. http://TicketLiq.com encourages Bon Jovi fans from all walks of life to check out the deals that are currently being offered either by visiting the website or calling 866-943-1567.