A research team in Australia has been recognized for outstanding contributions to optical fabrication, metrology, and coating technology and applications. The CSIRO (Commonwealth Scientific and Industrial Research Organization) team from the Australian Center for Precision Optics was presented with the 2012 SPIE Technology Achievement Award during the Australian Institute of Physics Congress in Sydney this week. 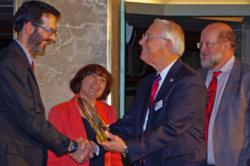 World-leading expertise in optical fabrication, metrology and coating over more than three decades has earned high-level recognition for the CSIRO (Commonwealth Scientific and Industrial Research Organization) team from the Australian Center for Precision Optics. The team was presented with the 2012 SPIE Technology Achievement Award during a major international optics event in Sydney this week.

Along with Farrant and Dligatch, CSIRO team members are

Arnold was among invited speakers at the congress, presenting a talk on “Progress in extreme ultraviolet lithography for IC manufacturing,” in the session on Optics, Photonics and Lasers: Nanofabrication.

SPIE CEO Eugene Arthurs also attended the congress, and visited the Swinburne University of Technology where he gave a talk on “Photonics: An Area of Promise in a More Difficult Era for Science.”

SPIE is the international society for optics and photonics, a not-for-profit organization founded in 1955 to advance light-based technologies. The Society serves nearly 225,000 constituents from approximately 150 countries, offering conferences, continuing education, books, journals, and a digital library in support of interdisciplinary information exchange, professional growth, and patent precedent. SPIE provided over $2.7 million in support of education and outreach programs in 2011.