Sam Kavanagh will be a featured interview on “X-Ray Yellowstone” airing Sunday, December 23rd at 9PM E/P on Discovery Channel’s CURIOSITY series. “X-Ray Yellowstone” will take viewers inside the hidden wonders of the National Park to discover what truly makes Yellowstone unique. 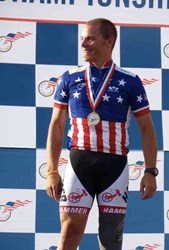 As an avalanche survivor himself, Sam is passionate about driving awareness to the causes behind avalanches and what precautionary steps you can take to avoid finding yourself engulfed in one of these destructive snowstorms.

In August of 2012, sitting atop Northern Oregon’s stunning Mt. Hood, Sam sat down for a live interview with the Discovery Channel to share his experience and insight as they begin to explore what triggers the park’s deadly avalanches. Sam will discuss the power of an avalanche and the snow’s effect on Yellowstone National Park. As an avalanche survivor himself, Sam is passionate about driving awareness to the causes behind avalanches and what precautionary steps you can take to avoid finding yourself engulfed in one of these destructive snowstorms.

“As an advocate of being outdoors and an avalanche survivor it is extremely important to me to bring avalanche awareness to the public,” explained Sam after being asked what inspired him to work with “X-Ray Yellowstone.” “Discovery has given me the opportunity to share my story and I am hoping by doing this others will take what they hear and see with them as they hit the slopes this winter,”

On January 1, 2005 while backcountry skiing in Montana, Sam was caught in an avalanche that resulted in a severe compound fracture of his left tibia and fibula. After spending two days in a tent with his leg duct-taped to a shovel, dodging massive blood loss, kidney failure and life threatening infections Sam was rescued. After nine surgeries, including the amputation to his left leg below the knee, Sam received a prosthetic and continued his active lifestyle of cycling, hiking, and skiing. Having always been a competitive cyclist and skier, the dream of becoming a Paralympian was born. Sam won a bronze medal at the London Paralympic Games in the Para-Cycling Team Sprint, and is now ready to trade in his bicycle for a pair of skis and begin training for the 2014 Sochi Paralympics. For more information visit http://www.factory-agency.com/athletes/sam-kavanagh-0.