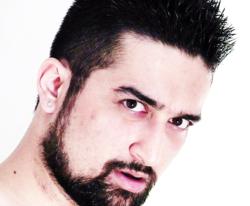 "When Caucasian love was returned in Arizona... it was the greatest happening in America"

Omer Pasha Movies have recently collaborated with LuvNGrace Entertainment based in Vancouver, owned and run by Vernard Goud. LuvNGrace events are high-tech social galas that feature today's trend, style, fashion, glamour and culture in the local community in Yaletown ,Vancouver. The LuvNGrace events have been thriving and successfully running for the past several years, bringing together the elite and social class of Vancouver in creating the most magical, exquisite and fancy
cock-tail parties taking place all over downtown Vancouver at fancy hotspots and venues. The events feature fashion shows, dance performances, live music, product promotions and much more.

A colossal compilation of more than 500 music videos and short movies produced by Omer Pasha have been screened and played non-stop at famous hotspots in downtown Vancouver; to name a few “Pink Thai”, “Chinois” and “Fortune Sound Club.”

Omer Pasha Movies have received a tremendously, positive and encouraging response from the local Vancouver Community.

To name a few from the double feature length music video and short film compilations that have been featured at the galas:

California Midnight Movies sprout from a small town in Los Angeles, “Glendale.” Pasha escapes, flies and runs from witches and demons that want him not to meet caucasian people,“ the loves of his life.”
This action-movie style musical saga extends over Sacramento, San Diego, Santa Barbara and all over Los Angeles,Hollywood etc. Pasha breaks all curses with the power of spirituality.

“The New World Order,” Pasha was inspired to make this musical solely based on a single event in his personal life; his supernatural meeting with Dajjal-The Anti-Christ, a political leader from the future.

The title song “You Let It Come (Radio Mix)” is sung by Pasha for Satan, to the Devil. The song suggests that when Dajjal is unchained from his island, “will you under-estimate Christ?”
When Dajjal establishes the new world order and has left the world, the “devil's respite time has died” and the end of the world is indeed near.

“Vancouver Midnight Movies” are a patriotic tribute to the city and people of Vancouver; for being the most glamorous, peaceful and party oriented city in Canada. Local actors and dancers parade over Surrey, New Westminster, Burrard Street, Robson Street, Davie Street and all over downtown Vancouver in a celebration of the city's happiness and fancy life style.

All camera-work, editing, productions, vocalization of songs have solely been done by Omer Pasha for all music videos and short movies.

In upcoming events, Omer Pasha Music Videos and Short Movies will be featured at the Lady Gaga “Born This Way Ball” tour after party (Unofficial) in January 2013 in Vancouver. This is another mega event/party by LuvNGrace Entertainment.