Stevens Pass Mountain Resort receives 193 inches of snow in first 21 days of December, making it the third snowiest since records started being kept in 1951. 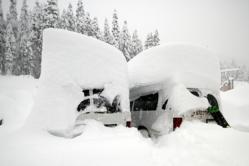 Vans buried in the snow at Stevens Pass Mountain Resort on December 8.

Timing could not be better, allowing folks to get out on the slopes during their holiday break and enjoy the extraordinary conditions.

Stevens Pass has already received 193 inches of snow this December, making the month the third snowiest December since the resort started keeping monthly records in 1951. With 10 days still remaining in the month, the resort could break the December record which was set in 1996 with 228 inches of snowfall.

“We are ecstatic about all of the snow we have received this month. While much of the country has lagged behind on snow totals, the Pacific Northwest has been blessed with the best conditions in the country,” said Bill Bourton, General Manager. “Timing could not be better, allowing folks to get out on the slopes during their holiday break and enjoy the extraordinary conditions.”

Earlier this month, Stevens Pass woke up to historic snowfall when 39 inches of snow fell in a 12-hour period from 4:00pm to 4:00am. This was the most snow overnight Stevens Pass had seen in recent decades, bringing the resort’s 24-hour snowfall total on the morning of December 8 up to 48 inches and their 48-hour total to 69 inches.

John Meriwether, the resort’s meteorologist, explained, “Much of the epic snow we have had recently was due to the position of Stevens Pass to the Puget Sound Convergence Zone. This weather pattern channeled wind and snow up through Stevens Pass and unloaded an incredible amount of snow.”

Stevens Pass Mountain Resort currently has a snow base depth of 89-93 inches with 100% of terrain open. The resort will have expanded hours during the holidays, operating from 9 a.m. to 10 p.m. daily December 25 through January 5.

About Stevens Pass Mountain Resort
Celebrating its 75th year of operation, Stevens Pass is located 78 miles east of Seattle on the crest of the Cascade Mountain Range. Stevens receives over 450 inches of snow, on average, annually, covering 1,125 acres of skiable terrain – including 37 major runs and numerous bowls, glades and faces. The ski resort has a variety of terrain for every age and skill level. Normal winter operations run from early December to mid-April.

A snowboarder enjoys the deep snow at Stevens Pass Mountain Resort on December 18.

A skier enjoys the deep snow at Stevens Pass Mountain Resort on December 20.