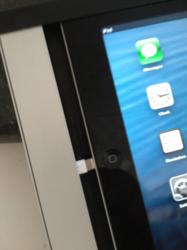 Our customers want the best, so that's what they get.

Cool Invent LLC today announced their latest version of the VERSI iPad stand, which is now compatible with the iPad mini. The new improved version of Cool Invent's industry-leading iPad stand dual purposes as a docking station, helping users to effortlessly view their Apple devices hands free, while charging them at the same time.

Customers have the option of ordering the single VERSI to charge a single iPad / iPad mini, or to use the Dual VERSI, also available at VersiStand.com, to charge their iPhone simultaneously. Both versions are also compatible with the iPad 2, the iPad 3 and all models of the iPhone, including the iPhone 5.

For new iPad mini users, the VERSI is the best iPad and iPhone docking station, because of its VERSItile design, which tilts, swivels and rotates to the position users need to utilize iPad apps or apps for the iPhone while charging, but without the hassle of cables.

The VERSI and Dual VERSI iPad mini stand works as a docking station with the flexibility, usability and aesthetics that Apple customers have come to expect. “One of the things we realized about other iPad and iPhone docking stations was their instability and difficulty of use,” which is why the VERSI’s base is made of solid granite. “But we had to go a step further,” he went on to explain. Docking and undocking the iPad and iPhone from the VERSI can be done with a single hand, unlike other products, which often have an unstable base that won't release the iPad or iPhone without using two hands. “People break their phone or stands, because of flawed designs. Our customers don't have that worry.”

Both versions of the VERSI are designed with CNC machined aircraft grade aluminum and a soft polyurethane backing. In addition, the Apple device charger and docking station rotates up to 180°, tilts up to 90°, and swivels an incredible 300°. With a price point of $189, the new VERSI is the only option for iPad mini users.

About Cool Invent
Designed from the ground up, in 2010, Cool Invent developed the first VERSI prototype. Inventor Dale Rorabaugh received his Doctor of Optometry from UC Berkley and developed a very successful practice. In 1982 he founded Dicon, a company that designed, manufactured and marketed advanced ophthalmic medical devices. Dr. Rorabaugh has won design awards, published 7 times, and has 9 major patents. Visit Cool Invent LLC online and become a follower on Twitter and a fan on Facebook.