Rose Monday in Düsseldorf is One of the World’s Biggest Carnivals; Party Season in Full Swing Now Until February 11

A million revelers and a mile-long parade turn Düsseldorf -- a city that is No. 6 on a list of global cities in quality of life -- into a rollicking spectacle on February 11, Rose Monday. More than 300 carnival sessions and events lead up to Rose Monday, make Düsseldorf one of best winter party destinations, and Düsseldorf Marketing & Tourism, the city's tourism office, is offering hotel and city specials. 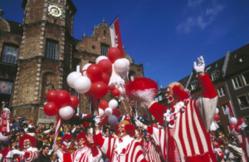 It’s a time when the city, known for its cosmopolitan character and sophisticated living, reveals its wild side and becomes one of the best destinations in Germany for serious party seekers in the winter.

The annual one-day phenomenon called Rose Monday falls on February 11, 2013. Rose Monday is the roaring conclusion of 3 months of carnival season in Düsseldorf, which kicked off on November 11 and is now in full swing with 300 carnival events and costume balls all over town. It’s a time when the city, known for its cosmopolitan character and sophisticated living (Düsseldorf ranks No. 6 on a list of global cities in quality of life – Source: Mercer’s 2012 Quality of Living Survey) reveals its wild side and becomes one of the best destinations in Germany for serious party seekers in the winter.

To jump into the Carnival madness, travelers can hop on a plane (there are non-stop flights to Düsseldorf International Airport (DUS) from 11 North American cities), and be in the thick of things mere minutes after landing.

The Rhine region is known as Germany’s center of carnival festivities, or Rhenish Carnival, and Carnival in Düsseldorf is one of the strongholds. Carnival is not just one day, but a whole season, called Fools’ season, and always kicks off on November 11. It ends on Ash Wednesday (the beginning of Lent: February 13, 2013). The season culminates in Rose Monday, its highlight. The city has no fewer than 60 carnival clubs, and their members are among the 5,500 parade participants who also make up the 45 bands and 60 floats. One million people, many dressed up in costumes and called fools, line up to watch the Rose Monday parade, shout “Helau” (the local carnival greeting), and catch the candy (called “Kamelle”) that is thrown into the crowds from the floats. The parade is more than a mile and a half long.

Because of Düsseldorf’s 260 bars, pubs, and restaurants in the city’s historic Old Town, the city is also known as “the longest bar in the world.” And these venues become the backdrop for the extended festivities as the parade spills into the entire city and the revelers take over.

In addition to the parade there are several street carnivals: the “Old Ladies’ Carnival” on February 7, when women take over city hall and cut men’s ties off with scissors, a “Youth Procession” on February 9, a family-oriented “Carnival Sunday” on famous shopping boulevard Königsallee on February 10, and a “Barrel Race” – yes, that’s people in barrels racing – on February 10. The season culminates on Rose Monday with one million people, many dressed up in costumes and called fools, lined up to watch the exuberant Rose Monday Parade with its colorful and creative floats.

Miraculously, the city is back to its civilized self two days later, on Ash Wednesday, when Lent begins, and with it the long wait until the Carnival season kicks off again the next November.

Through 2013, Düsseldorf’s tourism office is offering hotel and city specials for this and other of the city’s major international events. Packages can be booked right from the tourism office’s website at http://www.duesseldorf-tourismus.de/hotelpakete. Prices start at €49 per night per person based on double-occupancy for a 2-3 star hotel in the city center and at €69 per person for a 4-5 star hotel. All packages include breakfast, a Düsseldorf Welcome Card (free public transportation within city limits plus 30 free or reduced admissions to city attractions), and a city information package. Please check the website for current information.

For more information about Carnival in Düsseldorf, please visit http://www.comitee-duesseldorfer-carneval.de.