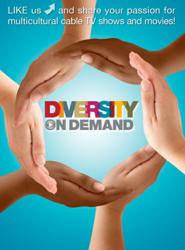 The cable industry recognizes its responsibility and privilege to use the reach and influence of television, the Internet and mobile apps to spotlight important issues

Beginning today, and throughout February, digital cable customers are poised just a “click away” from unlocking some of the history, struggles and beauty that are an integral part of the African-American experience as part of cable’s Diversity On Demand initiative. With the advent of advanced digital cable platforms like On Demand, viewers can learn more about African-American history at their convenience during Black History Month. Diversity On Demand kicks off February 1 focusing on Black History Month and wraps following Hispanic Heritage Month (Sept 15-Oct. 15), and is an expansion of cable’s on-going support of and commitment to multicultural programming.

Individuals, who “like” cable’s Diversity on Demand at http://www.facebook.com/DiversityOnDemand will see Black History programming updates and links to trailers and be alerted to various entertainment and blogger giveaways during the promotion. This will be an online destination where anyone interested in multicultural shows and movies can join to engage with others in the community, and learn more about what Diversity on Demand has to offer. Cable will celebrate multicultural programming throughout the year with contests, polls, trivia, trailers and more.

“The cable industry recognizes its responsibility and privilege to use the reach and influence of television, the Internet and mobile apps to spotlight important issues,” said Char Beales, president and CEO, Cable & Telecommunications Association for Marketing (CTAM). “Cable companies and content providers are uniting to provide customers with the opportunity to experience multiculturalism through history, drama, comedy, and even the joy of food. This February, Black History Month comes alive in the home instantly with a click of the remote, and cable looks forward to sharing the Hispanic experience with customers later this fall.”

Milestones in Black History: A look at the history of the struggles and strife, the tragedies and the triumphs of African-Americans in the U.S., including programming on the Civil Rights era. Everyone in the family can learn with documentaries like “The Black List” examining some of the reasons for Black History Month. And children young and old can take a trip back in time understanding the importance of historical events with “Seizing Justice: The Greensboro 4,” “On the Shoulders of Giants” and “Birds of a Feather: Tuskegee Airmen.”

Profiles in Courage: The biographies of influential African-Americans come to life with dramatic profiles and stories of acclaimed leaders and others who are not so well known—but perhaps should be, such as that of Lena Baker in “Hope & Redemption: The Lena Baker Story.”

Dramas: Programs and movies like “Independence Day” showcasing award-worthy performances from notable African-American actors such as Will Smith. You can also explore and share real-life family relationship dramas like “Braxton Family Values.”

Hearth & Home: Savor shows like “Down Home with the Neelys” that provide a look at food and other aspects of modern African-American culture and society.

Of the People: These programs exemplify the contributions made by multicultural talent, shows written by, starring, directed or produced by African-Americans, like Morgan Freeman in “Million Dollar Baby.”

That’s Entertainment: Laugh along with comedy specials such as “Chris Rock: Bigger and Blacker,” while romantic comedies warm the heart. If music is your thing, there are shows and movies such as “Ray,” the remarkable story of one of America's true musical geniuses, Ray Charles, that look into the past and present music-making of African-American artists.

CTAM, the Cable & Telecommunications Association for Marketing, is a non-profit professional association, dedicated to helping the cable business grow. To that end, CTAM provides consumer research, an interactive executive innovation series, conferences, awards and the “CTAM SmartBrief” to its individual members. On behalf of 90 corporate members, the organization leads the Advanced Cable Solutions Consortium and Business Services Council, and facilitates national cooperative marketing efforts, including the Cable Mover Hotline® and Movies On Demand® initiatives. The corporate website is http://www.ctam.com and CTAM can be found on Facebook, LinkedIn and Twitter.