Gruv Gear was proud to sponsor prizes for the top 8 teen bands at the third-annual SchoolJam USA teen battle of the bands held during the 2012 NAMM Show, one of the largest music products trade shows in the world, in Anaheim, Calif. Jan. 19-22, 2012. 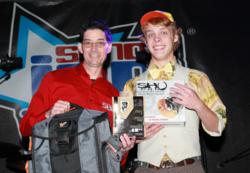 Our products are already used by some of the top musicians in the world, so it's fantastic to be able to get them in the hands of great up-and-coming talent through SchoolJam USA!
~ Jay Baldemor, Gruv Gear President

SchoolJam USA is a national program sponsored by the National Association of Music Merchants (NAMM) that rewards aspiring teen music makers, between the ages of 13 and 19, and their school music programs with funding and prizes, as well as the opportunity to perform live before the public and a panel of music industry professionals.

Of the more than 100 hopeful musical groups that applied to compete this year, eight talented teen bands hailing from cities across the U.S. made it to the finals event. Nearly 200,000 votes were cast for the bands during the four-week, open online voting period, resulting in nearly 1.5 million page views to http://www.schooljamusa.com.

Gruv Gear sponsored the event by offering the “Best Percussionist” winner with a brand new Stadium Bag, the company’s top-of-the-line multi-use tech backpack, used by drumming legends such as Jonathan “Sugarfoot” Moffett and Peter Erskine. Inside the bag were additional surprises of several packs of Sliiv Stick Sleeves, an innovative drumstick sleeve accessory that helps dampen vibrations and absorb sweat, while making each pair of sticks have a unique look and easy to tell apart. Both products are offered on Gruv Gear’s website at http://www.gruvgear.com.

"We're so honored that we were able to sponsor this great NAMM event," says Jay Baldemor, President and Founder of Gruv Gear. "Our products are already used by some of the top musicians in the world, so it's fantastic to be able to get them in the hands of great up-and-coming talent through SchoolJam USA!"

Competing against seven other finalist bands from across the U.S., San Diego ensemble, Jazz Avenue, took first place for the coveted title of “Best Teen Band in the USA,” $5,000 for their school music education program, $1,000 toward the purchase of new band gear, a private music video recording session on the John Lennon Educational Bus, and a grand-prize trip of a lifetime to perform at the 2012 SchoolJam Germany finals in Frankfurt this March.

Second and third place runners-up included: damsel band The Hi-Tops from Jeffersonville, Ind., and Ergo We Play from Knoxville, Tenn., respectively. In addition, specific individuals and bands were recognized for their talents in the following "Best Of" categories:

Additionally, a "Fan Favorite" award was presented to The Hi-Tops, which received more than 385 text message votes for that category during the live finals competition.

About SchoolJam
SchoolJam is an established music initiative, originally developed by MM MusikMedia Germany to promote popular and rock music in schools throughout Germany. The program has provided thousands of music-loving young adults with the opportunity to perform and network with their peers, increasing their love for playing music and encouraging them to become active musicians.

About NAMM
The National Association of Music Merchants, commonly called NAMM in reference to the organization's popular NAMM trade shows, is the not-for-profit association that unifies, leads and strengthens the $17 billion global musical instruments and products industry. NAMM is the sponsor of the Wanna Play? campaign, a public awareness initiative designed to get more people connected with the proven benefits of playing music. For more information about Wanna Play, please visit http://www.wannaplaymusic.com. For more information about NAMM, please visit http://www.namm.org.

About Gruv Gear
Gruv Gear designs and builds innovative utility gear and accessories for creative professionals, including musicians, DJs, photographers, cinematographers, film makers, audio/video engineers, and media crews. Founded by a musician and product designer, the California-based company has been seeing tremendous forward momentum and widespread acclaims in a very short time, with global patents pending for its current innovations and more game-changing products slated in 2012 and beyond.