As a company with a deep social conscience, Choice Textile Ltd has launched a hugely ambitious project to send one million text and educational books to the students of Imo State in Eastern Nigeria 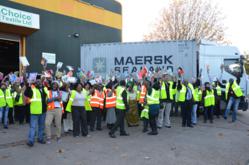 Triumph, as staff and delegates gather to bid farewell to the first of many containers to Nigeria

UNESCO report stated that “…Nigeria is home to the largest number of children out of school (8.6 million in 2007) is forecast to have as many as 8.3million children still not in school by 2015.”

Almost defying belief in such an oil rich country there are over eight million children who do not attend school in Nigeria, a figure unlikely to show any significant improvement over the foreseeable future. Even where children are lucky enough to reach a school, text books are in such short supply that in some of the poorest areas as many as twenty children will have to share just one book. And while in the UK every child has access to a library, there are very few libraries in Eastern Nigeria and even where they do exist they often hold only a limited and outdated range of text books.

As UNESCO has reported “... education is the key to increasing economic growth in poorer countries – just one dollar invested in education can generate up to fifteen dollars in economic growth ...” Or, as the UNESCO Director General Irina Bokova in October 2011 said: “...an educated population is a country’s greatest wealth .... there can be no escape from poverty without a vast increase in secondary education...”

A further document from the World Bank entitled “Textbooks and Library provision in Sub Saharan Africa“ reported that “...the most significant sources of information for students were copying from the blackboard, teacher dictation and low cost leaflets often in the form of notes plagiarized by teachers and sold to students . These leaflets are generally poorly written and equally poorly produced but are affordable and thus in demand. Cases were reported of teachers forcing students to buy their notes as a means of income supplement.”

Lots of fine words have been written by many distinguished people but what has been needed is practical, positive action to provide young children with the books they need. Now one visionary man is showing what can be done. Aloysius Ihezie, Managing Director of Choice Textile Ltd, has for years demonstrated a passionate interest in the value of education and charitable activities.

As a result of his belief in the importance of education, not only for the overall betterment of mankind, but also for the vital part it can play in the eradication of poverty and ignorance, his company has launched a hugely ambitious project to send one million text and educational books to the Imo State Government in Eastern Nigeria over the next one year or so. The books, to be distributed to all schools throughout the state, are being sent to support Governor Rochas Okorocha’s policy of providing free education for all children. Over time it is hoped to extend the project to cover other states in the region.

The first consignment of books was given a huge send off in London in the presence of Ambassador Dozie Nwanna, Deputy Nigerian High Commissioner, Dr Eric Uzoalor representing Amb. Ralph Uwechue, President General of Ohanaeze Ndigbo, Ngozi Njoku Director General Imo Foundation and Donatus Ozoemena, Deputy Speaker, Imo State House of Assembly, both representing the Imo State Government, as well as the full complement of Choice staff who had worked tirelessly to collect, sort and pack the books.

As a company with a deep social conscience Choice Textile Ltd has over the years supported the work of many UK charities, has already helped to meet the costs of building a new school in Mgbidi Oru West LGA, supported a children’s orphanage in Ghana, the SOS village in Lagos and, through Oxfam and the Red Cross, provided much needed assistance to the Haitian earthquake appeal.

Choice has promised that it will continue to meet all operational obligations right up to the arrival of the books in Nigeria. Once there the Imo State Government, working through the Imo Foundation and in close cooperation with Victor Ihezie, our Project Director, will oversee the warehousing, sorting and distribution of these books to nursery, primary and secondary schools, and in addition to libraries, universities and other colleges throughout the state.

And the result? Many hundreds of thousands of children and older students will be provided with these all important text books and will benefit from much greater educational opportunities.

Children who perhaps may have missed out on a comprehensive education will be able to stay on at their school; secure in the knowledge that they now have the books to enable them to continue with their studies. This new venture, operating from a warehouse in West London and in partnership with the free education policy of the present Administration in Imo State, will help lift many children out of poverty and ignorance and be of lasting benefit to future generations.