New Orleans is Named as One of Only Three U.S. Destinations on New York Times Winter Getaway List 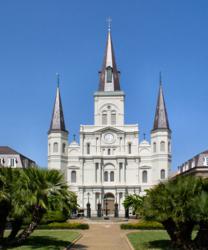 “Michelle Higgin’s article helps us emphasize that we have something to offer to all ages in New Orleans and it goes without saying that this endorsement is very powerful in attracting visitors to our city," said Mark Romig, President and CEO, NOTMC

The New York Times recently listed New Orleans as one of only three US destinations for winter getaways that are suitable for all ages.

The article was featured in the Sunday Travel section on January 29th, 2012 in the New York edition as well as on the New York Times website.

“The awards and recognition keep rolling in for New Orleans as its tourism industry continues to grow and thrive,” said Mark Romig, President and CEO of the New Orleans Tourism Marketing Corporation. “Michelle Higgin’s article helps us emphasize that we have something to offer to all ages in New Orleans and it goes without saying that this endorsement is very powerful in attracting visitors to our city.”

“Tourism is big business for New Orleans, drawing more than 8 million visitors per year, sustaining 74,000 jobs and generating $5 billion annually for the local economy. The New York Times report adds to our amazing first quarter of 2012, which will go down in history as one of the best times ever for New Orleans’ tourism industry, thanks to Mardi Gras, the BCS National Championship, Allstate Sugar Bowl, the Saints and the Hornets, SEC Men’s Basketball Championship, NCAA Men’s Final Four and dozens of festivals, meetings, and conventions,” said Stephen Perry, President and CEO of the New Orleans Convention and Visitors Bureau.

The Hyatt Regency New Orleans with its $275 million dollar renovation and the International House near the Children’s Museum are mentioned.

The article goes on to list nonstop flights from several major US cities, including Atlanta, Detroit, Los Angeles, Minneapolis, and New York.

New Orleans Tourism Marketing Corporation and the New Orleans Convention Visitors Bureau together promote New Orleans as a city that appeals to all ages. Upcoming family events include Mardi Gras followed by the French Quarter Festival and Jazz Fest.

About the New Orleans Convention and Visitors Bureau
The New Orleans Convention & Visitors Bureau is a nationally accredited, 1,000-member destination marketing organization and the largest and most successful private economic development corporation in Louisiana. We help create $5 billion in new capital each year- more than any other business sector - by attracting millions of visitors, special events and conventions. The CVB and its members influence thousands of decision-makers and millions of visitors to choose New Orleans through direct sales, marketing, public relations, branding and visitor services at our New Orleans headquarters and offices in Washington, D.C., New York, Chicago, Phoenix and four foreign countries. Consistently recognized as one of the top five CVBs in the country, the New Orleans CVB celebrated its 50th anniversary in 2010. For more information, please visit neworleanscvb.com; facebook.com/neworleanscvb and twitter.com/neworleans.