What Gold and Silver Outperformance Means for Barrick and Goldcorp; Report by Profit Confidential 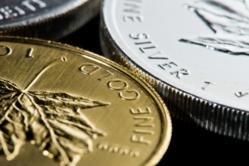 What Gold and Silver Outperformance Means for Barrick and Goldcorp

Gold and silver will continue to go up as long as central bankers keep the money tap open.

“We’re looking at monetary stimulus worldwide being implemented over the next couple of years,” says Cekerevac. “This will inevitably create inflation and a lack of faith in paper currencies plus added liquidity that will be pushed into commodities.”

“Both big-cap and small precious metals miners can offer some value for the investor,” says Cekerevac. “Barrick Gold Corporation and Goldcorp Inc. are huge, diversified precious metals mining firms that have a variety of gold and silver mines.”

This diversification, according to Cekerevac, protects the investor from any problems at one specific mine and the scale of production allows a better ability to predict the flow of revenue from gold and silver sales.

In the silver space, Cekerevac thinks Silvercorp Metals Inc. is an interesting company. He points out that the firm’s profit margins are healthy and the company has no debt.

Cekerevac believe that if gold and silver prices continue to move up, an investor should look at miners that have a solid resource base, relatively low level of debt, and consistent history of hitting their targets.

“Gold and silver will continue to go up as long as central bankers keep the money tap open,” says Cekerevac.

Profit Confidential, which has been published for over a decade now, has been widely recognized as predicting five major economic events over the past 10 years. In 2002, Profit Confidential started advising its readers to buy gold-related investments when gold traded under $300 an ounce. In 2006, it “begged” its readers to get out of the housing market...before it plunged.