The Allies of Humanity Book 3: A Message to Earth by Marshall Vian Summers was released on February 16 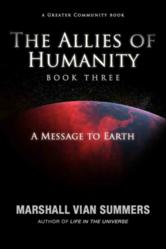 The Allies of Humanity Book Three: A Message to Earth

Provided by a group of off-planet observers called the "Allies of Humanity" who seek to warn Earth of a dangerous ET intervention now underway.

On February 16th, author Marshall Vian Summers released his newest book, The Allies of Humanity Book 3: A Message to Earth, which reveals a hidden extraterrestrial takeover on Earth and the wider implications of contact with life in the universe.

Summers' Book 3 is the third installment of the internationally popular Allies of Humanity series and is being released as a $3.99 E-book for Kindle, Nook and iTunes. According to Summers, the "briefings" contained in Book 3 were provided by a group of off-planet observers called the "Allies of Humanity" who seek to warn Earth of a dangerous ET intervention now underway.

“The true story of the Allies of Humanity,” says Darlene Mitchell, editor of Book 3, “is the heroic journey of a small group of beings from a handful of nearby star systems. They were sent to Earth on a mission from free worlds to alert humanity to a clandestine invasion taking place in our world by commercial forces in the universe."

In an interview on Coast to Coast AM, Summers said, "The publication of the first set of Allies of Humanity briefings actually endangered these observers and forced them to leave. Not only did these brave individuals dedicate their lives to this mission, leaving their home worlds behind—possibly forever,” said Summers, “but some very important figures died to deliver this message.”

Book 3 presents new information about the activities of a clandestine ET intervention and its plans to exploit Earth's resources, usurp human leadership and employ humanity as a workforce for resource extraction. The Allies of Humanity reveal that Earth is a rare "biological storehouse" in a universe of barren worlds and that the biological assets of Earth, such as water, plant cells, blood plasma and genetic building blocks, are highly sought by commercial forces in our region of space.

Book 3 advises humanity to build unity and freedom and to defend Earth's borders to space from alien forces who seek to subtly entrap our world in an ET sphere of control. Along with this, it presents a set of requirements for what human governments and citizens must do to thwart ET intervention and protect our freedom in the universe:

Discretion: The activities and telecommunication broadcasts on the surface of our world are observable by the Intervention. Radio communication into space must be limited.

Self-sufficiency: If we deplete our life-sustaining resources, we will be forced to trade for them with ET nations at a high cost and at great disadvantage.

Unity: Until the nations of the world unite, no ET force will recognize or honor human sovereignty. Instead, we will be treated as a bickering set of tribes living atop vast natural resources desired by others.

While a forceful call to thwart the dark activities of ET intruders, Book 3 is above all else an inspirational message to all people who value humanity's freedom and sovereignty, declaring that, "It is time to realize what humanity has learned through its long and difficult history regarding intervention and the dangers to the freedom and self-determination of the native peoples. All of humanity are now the native peoples of the world, facing intervention."

The Allies of Humanity Book Three: A Message to Earth is available as an E-book at Amazon, Barnes & Noble, Smashwords and AlliesOfHumanity.org. Please contact Reed Summers for further information or to request an interview.