XIMEA White Paper Asks Manufacturers: What Would You Do With the Power of a PC and PLC in an Industrial Camera? 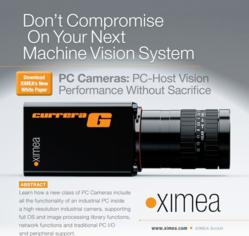 "PC Cameras: PC-Host Vision Performance Without Sacrifice," white paper explains how new heterogenous microprocessors allow industrial camera makers to put all the functionality of a PC and PLC inside a camera housing.

XIMEA GmbH, manufacturer of machine vision cameras and hardware, has released the new technical white paper, "PC Cameras: PC-Host Vision Performance Without Sacrifice. The paper, which is free to the public, explains how new low-power/low-thermal dissipation microprocessors and GPU-accelerated multicore processors enable machine vision camera makers to put all the functionality of a PC and PLC inside a solid-state digital camera for automated quality inspection, measurement, and robot guidance applications.

These are just a few examples of how machine vision clients can benefit from a new class of industrial PC camera described in “PC Cameras: PC-Host Vision Performance Without Sacrifice,” a new white paper from XIMEA GmbH, manufacturer of industrial, smart camera, and scientific imaging equipment.

In the past, machine vision customers have had to choose between fully functional, space-hogging PC-host systems and compact, smart cameras that are not all that smart. Until now, cutting-edge microprocessors capable of 10s of Gigaflops per second generated too much heat for a smart camera form factor. This new white paper explains how products such as XIMEA’s new CURRERA line of PC cameras use high-speed, low-power Intel Atom and AMD Fusion microprocessors with zero copy transfers to achieve upwards of 90 Gigaflops – enough to match a PC-host system with enough spare horsepower to include an integrated PLC with microsecond latency.

About XIMEA
XIMEA GmbH believes that the best industrial, smart, and scientific cameras offer the highest levels of processing power, compatibility, and support at a competitive price. That’s why for more than 20 years, XIMEA has designed the smartest, most compact industrial cameras for machine vision applications in motion control, assembly, robotics, and industrial inspection and process control, as well as security and surveillance cameras and scientific cameras for life-science, medical, and defense applications. XIMEA is a proud member of AIA, EMVA, USB3 Vision and ONVIF associations and standards groups. Learn more about XIMEA at http://www.ximea.com.