HomeGain recognizes 43 Realtors with top honors based on nationwide, regional and state performance and achievements in 2011. 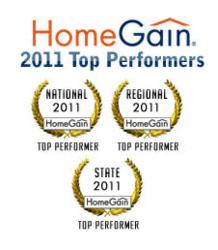 We are proud of our HomeGain members who have achieved great success with our AgentEvaluator product.

For the past decade HomeGain has annually recognized its most successful and productive real estate agents and brokers who are members of its AgentEvaluator® product in each of six regions across the United States, as well as the overall top performing agents in all 50 states.

Overall, in 2011 HomeGain’s top four agents in the Highest Dollar Volume category earned an average of $88,072 in gross closed commissions from their HomeGain AgentEvaluator business with an average of 9 closed home sales (transactions).

"We are proud of our HomeGain members who have achieved great success with our AgentEvaluator product," stated Louis Cammarosano, General Manager at HomeGain. "We are pleased that HomeGain continues to contribute to their success by connecting them with qualified home buyers and sellers."

HomeGain's 2011 Nationwide Top Performer in total number of home sales for the sixth consecutive year is Barbara Tidwell with Keller Williams Realty in Texas (South region), closing 17 home transactions from AgentEvaluator business. The 2011 Nationwide Top Performer by total commissions earned is the team of Eric and Janelle Boyenga with Intero Real Estate in California (West region), earning $97,931 from AgentEvaluator®. Barbara and Eric and Janelle are also the Top Performers in their regions and states.

HomeGain also has a total of 1,065 member agents in the AgentEvaluator Silver, Gold, Platinum, Diamond and Million Dollar Clubs based on the following criteria:

AgentEvaluator® is a marketing program for real estate agents who are looking to connect with online home buyers and sellers.